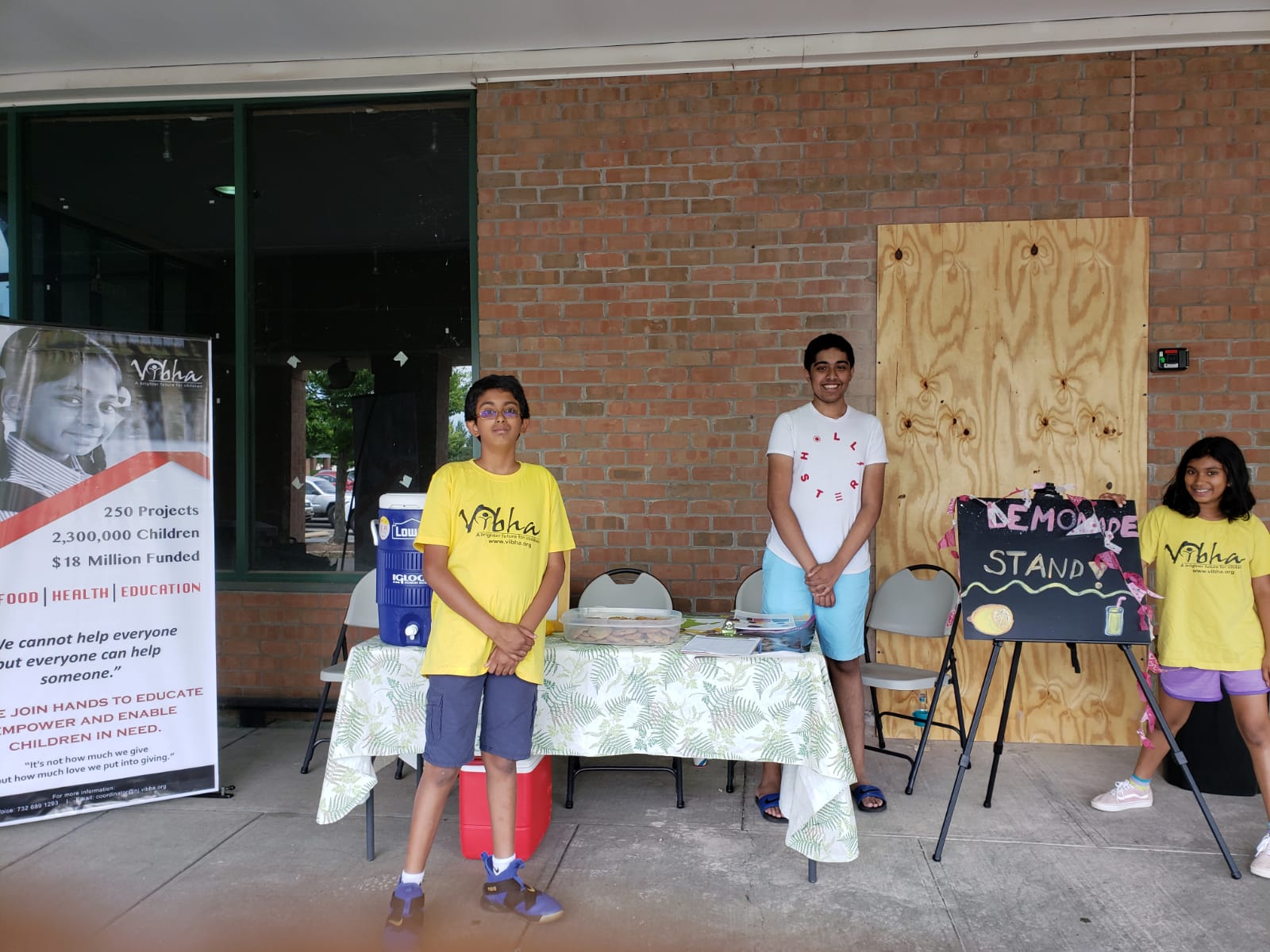 Posted at 10:30h in Vibhablogs by Anand 0 Comments
0 Likes

Now that summer is in full bloom, you may see children and young adults hold a car wash, lemonade stand or garage sale around your neighborhood.  Sounds like a fun way to spend your weekends or summer holidays.  Did you know there are indirect yet lifelong benefits to holding such events? This month, a handful of Vibha NJ/NY action center’s youth volunteers held a lemonade stand to raise funds for Vibha, a non-profit that works to enable and uplift underprivileged children. 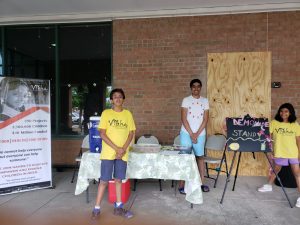 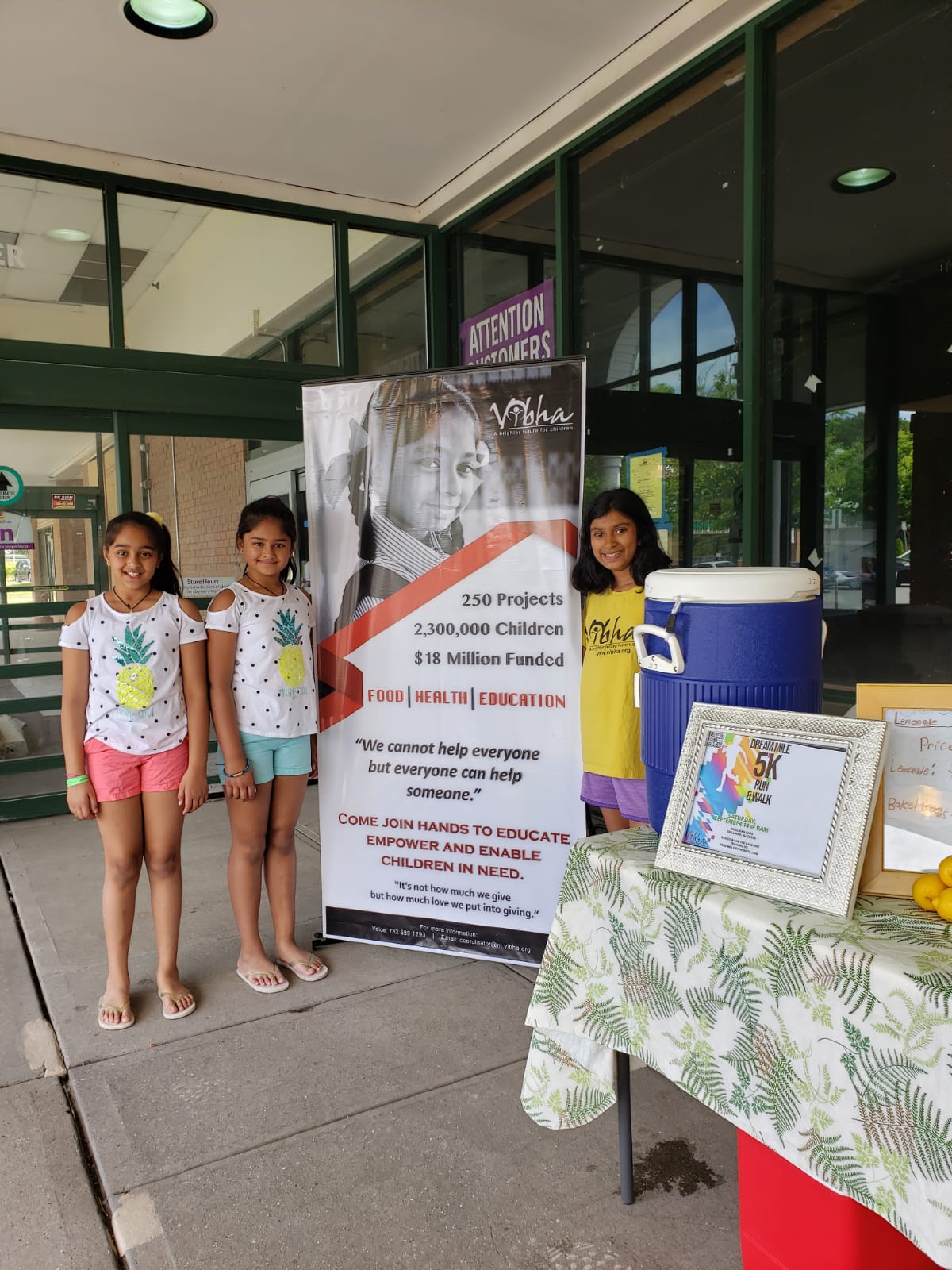 Here are 10 lessons and benefits they achieved as a result of the event:

If you think about the process of organizing and executing a lemonade stand, you will be amazed at the number of ways children learn about being responsible human beings and citizens.  For example, they learned that if they have committed to holding a sale, they must do what is needed; canceling the event would not be an option (of course unless there is a genuine reason or an emergency).  They also learned that they must participate in the process of planning, organizing and executing, with guidance from adults and peers where required.

As I made a list of things to purchase for the sale, things to bring to the stand, and other To-do’s leading to the day of the sale, I saw them add things to the list.  They learned prior to the event that, we had to carve out time to work on making a list for things needed to make lemonade and run a stand, the marketing materials, the lemonade stand poster, wake up early to make the lemonade, plan for the ice and where to store the material, etc. 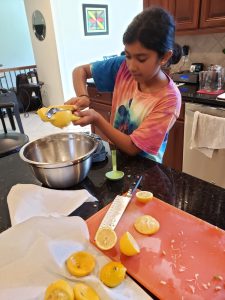 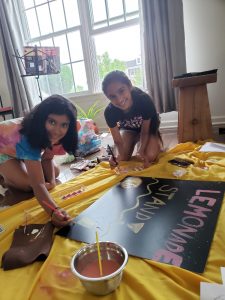 To make the stand as economic as possible, I encouraged the children to use supplies from around the house to make the lemonade stand poster, the pricing menu, picture frames and baked goods. In our basement, we had a decent-sized wooden board, paint, other craft materials and an easel.  The children enjoyed spending time together and designing and decorating the display poster- “Lemonade Stand.”

Immediately after the first 5-10 minutes into the sale, the children realized that their pitch was not working. I decided to encourage by action; I started walking up to the shoppers right before the store entrance asking them if they would like to buy lemonade to help us raise funds for Vibha. Soon enough, the children also started doing the same.  With each subsequent pitch to the shoppers, the message got crisper and more convincing.  The children finally sounded like they believed in the cause!  Their level of confidence shown on their faces, in the tone of their voice and their body language…. all components of a fearless public speaker.

This event allowed my children to make new friends; two other children from our neighborhood helped design and create the event poster and price menu.  At the stand also, they got an opportunity to mingle with each other as well as with people who stopped by to either buy the lemonade and baked goods, ask questions about Vibha and its mission (vibha.org/about-us/about-faqs) or simply to donate because they wanted to encourage the children to continue doing things for the “greater good.”

The children also learned that to be able to increase your potential revenue you should have some change handy so that you can give it back to customers when they give you larger bills.

After the sale was completed, the children were eager to know how much they had raised.  This was an opportunity for them not only do the math-counting sum total of the raised funds but also organizing the bills by value (i.e. $1, $5, $20 etc.).

Another best practice after the sale was to let the children calculate their expenses from the stand. How much did the cups, lemons, sugar, marketing materials etc. cost, subtracting the money spent from the total money raised to find out how much profit they made. This allowed the children to learn the basic concept of (Revenue – Expenses) = Profit.

They also learned the concept of minimum wages.  Once we calculated the total money raised, the children and I discussed how long they would have to work at the current state minimum wage to earn the same amount.  Not surprisingly, their first response was “We should do this every day!”

After the first half, there came a courageous young volunteer, who quickly convinced another young volunteer to personally go inside over 20 stores and restaurants in and around the stand venue. Both girls invited the shoppers and the employees to come to the stand, with an explanation of the cause when given the chance to speak.  Two folks from different shops came over few minutes later to buy lemonade.  “You have some great marketers,” was a comment from one of those visitors.  There were two more who were not interested in the lemonade or the cookies but came by just to donate money.

It didn’t take too long before the children felt comfortable enough to solicit shoppers to listen to their pitch and if lucky come to the table.  The first sale didn’t happen until almost 15 minutes after the initial set up.  Theoretically 15 minutes may not seem long, however to a child that is a “long” time.

After we neatly set up and decorated our stand with drinks, cookies and informational brochures about Vibha, we were ready to do the business!  However, not many people came to the stand.  Some people either looked at us from the corner of their eyes and walked past us. Whereas the others either said they don’t drink lemonade or are affiliated with another non-profit organization.

“Since I have worked so hard to put up this stand and I am doing this for a good cause, everybody will come by and buy at least one glass.”  This was the thought process in the children’s minds.  Most of us, at some time, have said no to donating even the smallest amounts because of various reasons, neither wrong nor right.  That is part of our discretionary spending and most of us like to contribute or donate to the causes in which we believe most strongly.

The children learned that they do not need to feel discouraged by hearing a ‘no’. Zig Ziglar (ziglar.com) once said “People don’t buy for logical reasons. They buy for emotional reasons.” The children learned that instead of asking people if they want to buy lemonade, they were able to attract more folks to the table if they asked something like “Would you like to buy lemonade to help us raise funds for Vibha, a non-profit benefiting the underprivileged children?” It’s difficult to say no to a child who is raising funds to help other children, in need.

The children’s hearty statement about “doing this every day” was driven more by the desire to do something good than it was to earn or raise more money.  For example, they understand that the amount raised can provide educational materials for up to 10 children for one whole school year.

Sorry, the comment form is closed at this time.