Learning in the time of COVID-19 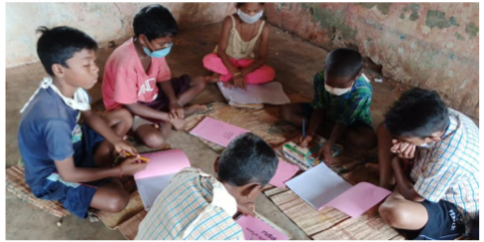 After central government of India imposed a countrywide lockdown, a local government agency ITDA (Integrated Tribal Development Agency) of Andhra Pradesh also imposed a lockdown. Paderu region in Andhra Pradesh is a hilly area and because of its such location, people in the villages around this area find it very difficult to have access to proper education and anything more than very basic medical facilities. This lockdown, along with other aspects of people’s lives in these villages, took a toll on children’s education as well. Hamsabanda was one of the villages in Paderu area where the education system got adversely affected by the situation.

Sikshana, one of Vibha’s long-standing partners, stepped in to help the villagers ameliorate the affected education system in Hamsabanda village. Prakashdeep, a mentor at Preparation (which if one of Sikshana’s initiatives) took up a task of educating the children of this village. His journey is a tale of hope, patience and perseverance. Being born and grown up in a village himself, Prakashdeep knew that unlike people in cities, people in a village are closely knit, so making them understand about the importance of his task collectively would be a challenging undertaking.

On the first day when Prakashdeep after overcoming adversities, like bad weather conditions and driving on windy winding roads, reached to Hamsabanda village, he was asked to wait in a small office right outside the village, where he needed to meet some elderly people from the village to get a ‘verbal’ permit to enter the village. After a long wait, someone came and to Prakashdrrp’s great disappointment he was asked to go back, because he could not be allowed in the village given the Coronavirus pandemic situation. Even though Prakashdeep explained his noble purpose of visit, the elderly villag

er denied his entry in the village. When he informed the Sikshana Head office, they offered him a new project to cut his struggle, but Prakasdeep wanted to try again. He had a positive feeling that the village will allow him to teach the children. He made 2 more efforts to try to get in the village but failed. Hence, for the fourth time, he went to the village with a different strategy. This time he brought along with him some pictures of children from Prerana centers and patiently explained the villagers the importance as well as benefits of continued education and how gaps in between can negatively affect their lives. Prakashdeep looked at the village people in astonishment when after finishing his talk, they completely understood his intentions and welcomed him in the village with open arms. But this was not an end of his struggles. He still had one more milestone to achieve in the path of success. He was taken to a local school, where he would first deliver an hour-long lecture on Mathematics, based on which the school staff as well as villagers would make a collective decision about whether or not to allow him to continue teaching the children. Prakashdeep distributed Mathematics practice books to the children and taught them for about an hour. After that he was asked to wait in another room. Half an hour later he was called again by the head of the village and informed that they are allowing him to teach the children.

On his official first day Prakashdeep was welcomed by the village community. He was given one of the classrooms in the school. He arranged the seating for children according to the social distancing norms. All the 25 children of the village were present in his first class. He distributed some books to these children and guided them on the use of those books. During his next class he learned that only 4 children had used the books. He divided them into groups of 5 and appointed a leader for each group and gave them instructions on group practice. During his next class he was pleasantly surprised to see that all the children had completed the exercises in the books. On enquiring the children, he came to know that the parents saw the children studying together, so they also took responsibility and arranged a common hall for the children so that they all can study in a group. Every day one of the parents or an elder youth supervises the children when they are studying.

Children responded well to Prakashdeep because he spent an hour with them, not only giving them bookish knowledge but also entertaining them with some stories and games. They could see the value addition of this interaction to their lives. Parents changed their attitude and got involved in the process too because they could also see the difference this process and Prakashdeep’s efforts were brining into
their children’s life. Parents were relieved and happy to see their children investing time in educational activities with discipline instead whiling away their time in fishing and climbing trees.