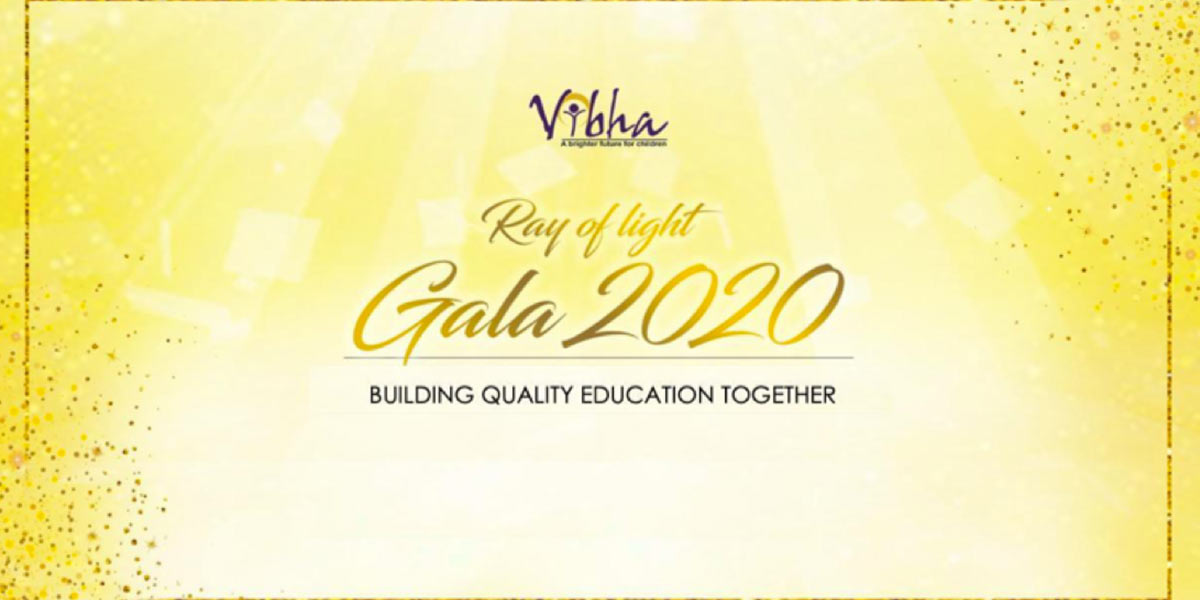 On December 12th, we forgot the gloom of the pandemic as we participated in Vibha’s first virtual Ray of Light Gala, which showered us with sparkles of inspiration, melody and warmth.

The list of luminaries who spoke was long and varied, and each contributed to creating a thought-provoking evening about using our power, voice and connections to impact public education.

The evening began with words from the Advisory Board, who elucidated the vision followed by over 2000 Vibha volunteers in two nations, USA & India. Seema Chetal, Durgesh Das, Ron Victor, Shri Dodani, B V Jagadeesh, Prof. Jagdish Sheth all spoke eloquently about the transformative power and promise of education. They established Vibha’s 5-year goal to reach 10 million children in public schools through its six strategic programs and visionary partnerships.

This was followed by Rehnuma, a video journey of a child, who is curious, loves dance, art and music, but had no teachers until one came into his life. The Shankar Mahadevan Academy collaborated with Vibha to create a magical musical accompaniment to this story. Pictures and rhythm captured the unique beauty of this child on the streets of India, who is the face and heart of Vibha’s endeavors.

Nisha Mathur, producer and anchor of SONY Entertainment Television, was the host for the Gala. She kept the energy of the evening and invited all attendees to donate to Vibha and follow in the footsteps of Martin Luther King Jr. to carve the mountain of education and find hope for many

students without access and means. She invited each of the Gala’s speakers to share their journeys and how education had an impact on their personal and professional success.

Randhir Jaiswal, the Consulate General of India, was the first speaker. He lauded Vibha’s efforts to provide education to many, and alluded to his own education as the reason for his success. He urged the audience to participate and collaborate with Vibha in reaching as many lives as possible. His presence also underlined Vibha’s strong commitment to work with government agencies to create scalable, deep and lasting change in educational policies.

Anurag Behar, CEO of the Azim Premji Foundation, then spoke about public education as “the foundation of a vibrant democracy” and a mechanism that will “build a society that is just, equitable and humane.” He celebrated the National Educational Policy of 2020 as transformative because of its focus on revitalizing teachers, improving infrastructure of public schools and moving from a rote-focused culture to one that develops multiple capacities of students.

This was aptly followed by focus on Vibha’s work to scale impactful solutions through partnerships with NGOs and local governments. Prasanna Vadayar, CEO of Sikshana Foundation, one of Vibha’s biggest partners and programs spoke about the impact Vibha has had in seeding, scaling and growing the Prerna program and reaching more than 2 million students in almost 44,000 schools. Next we saw two of Vibha’s partners- Leap for Word is making English language learning and professional learning opportunities accessible to all students in regional language schools. Through a unique program, based on 10 years of research, they aim to reach 140 million children in non-English speaking schools; whereas the Language and Learning Foundation (LLF) is focused on foundational literacy and numeracy skills. With Vibha, they are working in 200 schools in Chhattisgarh through a project called NEEV where 12,000 kids in grades 1-3 are being reached.

Jay Chaudhary, the next speaker, grew up without electricity and running water till grade 10 in a tiny village in Himachal Pradesh. On the wings of ambitious, hard-working parents committed to education, and dedicated teachers, he was able to attend premier institutes like IIT and University of Cincinnati, Ohio and study electrical and computer engineering. He credits his success as an accomplished serial entrepreneur, to these educational experiences, and his thirst for education.

Vikas Khanna, Michelin-starred chef, cookbook author and restaurateur extraordinaire was the next speaker, who, shared the lessons of his grandmother in Amritsar. The circle is completed, not when you take or benefit, but when you give back, he said. He talked about how this one kernel of truth has reverberated through his life. Vikas spoke about how he was propelled by his grandmother’s belief that he had other gifts to share with the world.

Dheeraj Pandey, the CEO of Nutamix, an erudite and deep thinking student, whose innate talent was celebrated by every educational institution he went to, spoke of his education in Bihar in the 80s, learning multiple languages including Sanskrit, appreciating Hindi poetry, learning math, science, and the values of secularism and tolerance, and becoming an amalgamation of these varied learning experiences. He urged reflection on what issues speak to you, ignite you and give you purpose. His twin daughters motivate him to invest in the education of girls and women, particularly in science and AI.

Vinita Bali, former MD of Britannia and a member of many international boards, eschews being comfortable for pushing important conversations. She spoke of a life of social responsibility as a life of living in harmony and peace, and asked each individual to contribute not just their money, but time and energy to those around them.

The program ended with a musical extravaganza by the Chordination Band, where Hema Nair, Kartik Raman and accompanying musicians presented a medley of popular Bollywood foot tapping songs.

Vibha’s 1st Ray of Light Gala was an absolute mix of thought-provoking, inspiring, and entertaining evening. However, the image we were all left with is the children from Vibha’s programs in India dancing, while wearing masks, to the tunes of Pharrell William’s “Happy” song. Those happy faces are the reason why we were all at the Gala, and why Vibha’s mission is so critical.

The Gala raised over $200,000 for Vibha’s work. As we close the year 2020, we invite you to collaborate with us in our mission to brighten the futures of these amazing children.