As a volunteer-driven organization, keeping our volunteers motivated, appreciated and always poised to take new opportunities on, is one of the most challenging tasks for the organization’s leaders.  Priti Sarda, as the National Director of Volunteer Relations, did just that and in a very thoughtful and thought-through way. 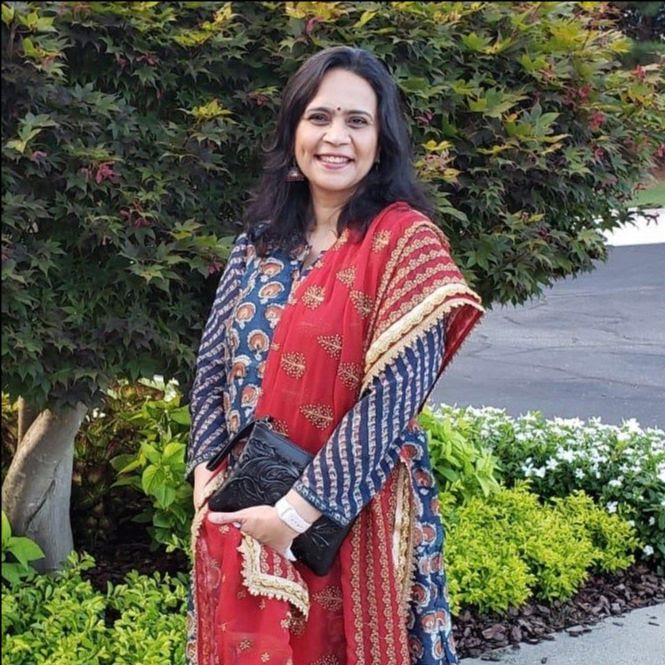 Priti’s journey with Vibha started in 2004 as an event day volunteer with Vibha’s Atlanta Action Center. In 2011, she stepped up as a Youth mentor with Atlanta Action center, mentoring and challenging the youth in giving back to the community for almost 4 years. Under Priti’s leadership, the youth group expanded from a handful high school students to several high school and neighborhood youth clubs eventually growing to almost 100 volunteers. She revived the Dream Play fundraising event – a Chess and Ping Pong tournament – that was completely planned and executed by Youth leaders for several years.

In 2015, Priti stepped up again and took on the co-Executive Director Role for the Atlanta Action Center. During her tenure, and alongside her two co-leaders, Priti has played a key role in catalyzing the growth of the Action Center to raising over $300,000 each year and leading more than 200+ event day volunteers.

Priti Sarda brought meticulous planning, resource/talent alignment and thoughtfulness to Vibha’s growing Action Center in Atlanta and carried that forward as she stepped into the National Director of Volunteer Relations in 2017. With Vibha’s renewed Annual Volunteer Conference – Volcon 2017, Priti played a central role, alongside Kannan Udayarajan, CEO of Vibha in 2017 to bring all volunteers across the nation for a 3-day learning, networking, empowering and energizing event.

During subsequent Volcon with a fundrsiang Gala and 3 VolconX Leadership conferences, she not only planned the conference agenda, training material, and logistics, but she also ensured each volunteer attendee felt empowered after the event. The development of our leaders, recognition of our volunteers, and growth of our action centers has always stayed forefront for Priti.

In all her roles, Priti has striven for thoughtful and appropriate recognition of the volunteering efforts of all volunteers across Vibha. She brought in equity, strived for diversity in people and thoughts, inspired creation of talent pools like design rangers who can support multiple action centers, instituted formal recruiting,  onboarding and rewarding process.

Most importantly, Priti, in all her 18 years of Vibha, has been a sounding board, a ear, and a shoulder to 100’s of volunteers across the country and even in India.

Priti has been recognized by Vibha with Volunteer of the year 2013 Award, multiple US President’s Gold Medal Service Awards over years and was also featured in Northside Woman magazine for her community service in 2013.

As Priti hands over the national role to Jasneet Anand, our incoming National Director of Volunteer Relations, the global community of Vibha filled her with tons of sweet memories, moments and respect for her contributions over the years.

Priti expressed her thoughts on the warmth she received “Thank You all for the kind appreciation! It was my pleasure to get a chance to work with you all. Vibha has given me a lot, and working with you all has always motivated me. Especially the National Role, has given me an extended Vibha Family and friends in many cities, countries”

Very few volunteer leaders have had the opportunity to have an impact across such a diverse volunteer base.  Thank You, Priti!!