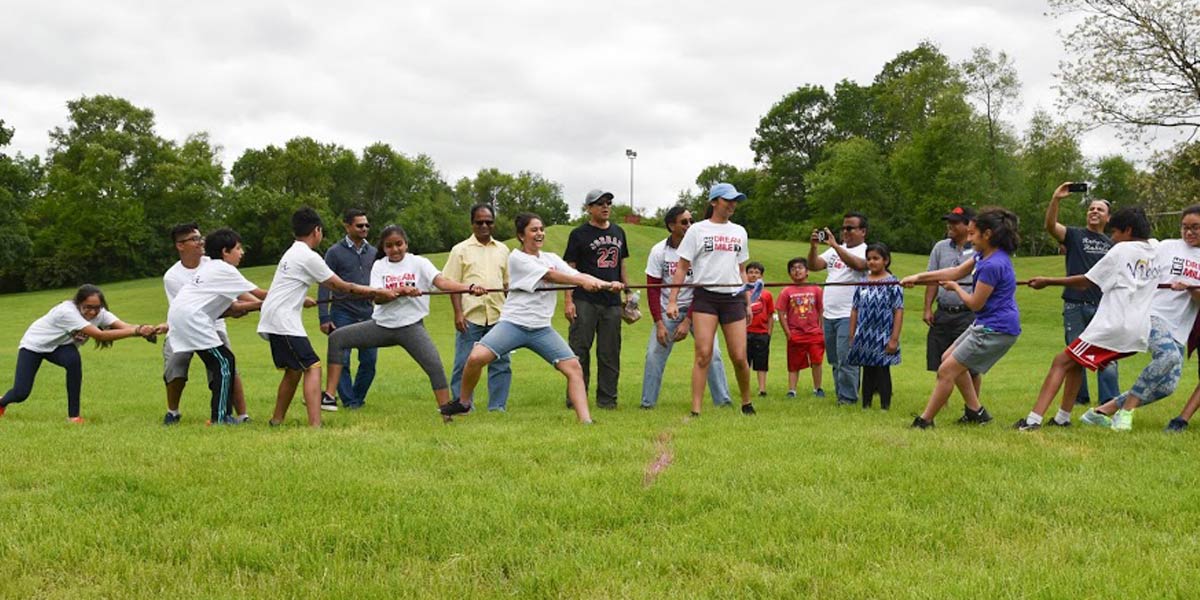 We have 12 active members who regularly meet once in a month and spend time at nursing homes once a month since the inception of the club. This is their first fundraising event wholly conducted by the club members with the club coordinator Sapna Patel and Vibha mentor Murthy Munagavalasa intervening only when needed. 1The only expectation Sapna and Murthy had from the Youth Club members is to get their feet wet and learn on how to conduct a fundraising event wholly by themselves. However, these 12 elementary, middle and high schoolers showed such enthusiasm and energy that it turned out to be an event attended by over 100 patrons and raised net proceeds of over $2,500. Here are some of the highlights.

All the club members distributed the responsibilities among themselves very wisely. Sanya Patel did the overall coordination for the picnic. Janavi Munagavalasa, Smrithi Sreedhar, Sruthi Sitamraju, Taej Desai and Sai Tej Avula were responsible for organizing games.

The responsibility for planning and executing food stalls was on the heads of Samyukta Munagavalasa and Harmohini Sidhu. Neha Charily, Sona Cyriac, Yash Patil and Srikar Munagavalasa very well performed their duties at the welcome table and Vibha booth, where they greeted every parton with a goodie bag containing a water bottle, a banana and a packet of chips. To those who are interested in knowing more about Vibha, they explained what Vibha is all about and how the proceeds go to under privileged children in India etc. Achyut Krishnan brilliantly performed his job as an EMCEE for the event.

Strategizing for the picnic-

Ticket sales – Each youth club member took responsibility of selling at least 10 tickets and closely tracked their progress each week. When they reached out to patrons via WhatsApp and did not get a response, they started calling them to check if they would be interested. Their persistence paid off in the end.

Game plan – They created a detailed list of games suitable for three different age groups. They formed teams to divide and conquer. Based on the tickets sold, they identified number of children in each age group, procured the necessary material and supplies they would need and organized the games in such an outstanding manner that the entire audience enjoyed them. The tug of war was such a hit that we had to conduct multiple times upon the request of patrons. Pretty much every single patron who came to the picnic participated in the water balloons game.

Food – The members decided that they will provide food at a very nominal prices. foodThey created a comprehensive menu of walk-in tacos, candy, bread bondas, water bottles, soda, chips etc. Several parents volunteered to sponsor the menu items and it turned out to be a great hit.

In the end, just before wrapping up, they called all the patrons together, and each youth club member spoke for a few minutes thanking the audience and telling them what they learned during the process of organizing the picnic and how it enriched themselves.

In the end, just before wrapping up, they called all the patrons together, and each youth club member spoke for a few minutes thanking the audience and telling them what they learned during the process of organizing the picnic and how it enriched them. All the volunteers were pumped up after the event. They are very much proud of themselves for pulling off such a grand fundraiser with a huge success to help the less fortunate children in their home country by organizing such events. For all of them, Vibha has become a very essential part of their life.