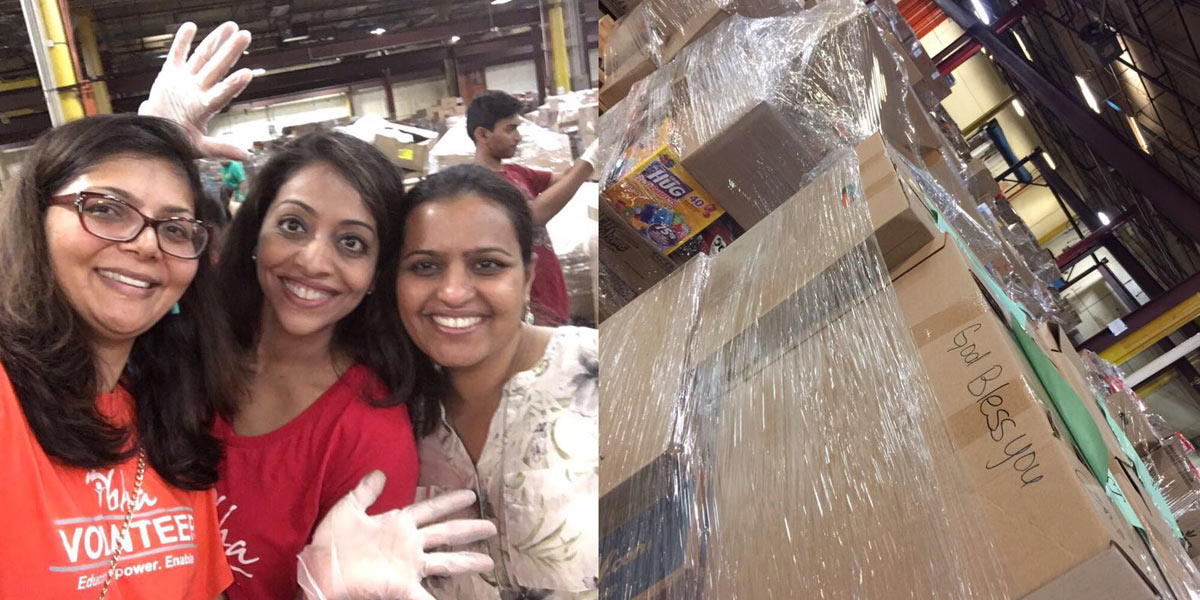 Over the years, Vibha has proved that it not only works toward education and empowerment of children and women, but also extends hands to people in need.

In 2015, when parts of Tamil Nadu were damaged severely by floods, causing destruction of entire human life by ruination of crops, loss of livestock, deterioration of health due to waterborne diseases, Vibha worked hard collaboratively with Society for Education and Action (SEA) in Kancheepuram District and supplied necessary education materials such as school bags, notebooks etc. to the schools. They also distributed water pumps and drums for storage to the villages to help restore lives of the people. Not only in India, even in the United States, various Action Centers have run campaigns time to time to raise funds as a part of relief programs at juncture of such catastrophes.

When Hurricane Harvey hit the coasts of Texas in August of 2017, Vibha came forward again with helping hands. With a rainfall of 50 inches, Harvey devastated a swath of Texas stretching from the Houston area into Louisiana. Even as the rain and wind moved on, the region continued to suffer consequences of the storm. Not only that, a series of explosions at a flood-damaged chemical plant drew sharp focus on hazards to public health and safety. The whole city was underwater, contaminated with toxic chemicals, sewage, debris and waste. Harvey took a toll on human life too. Several people lost their lives, many got trapped in their vehicles or houses beneath surging flood waters. Even the survivors had their own battle because it was not easy for them to get help. That’s when our volunteers pitched in.

Whenever humanity faces such natural disasters, we humans are left with no choice but to put our arms down in the beginning as there are going to be a series of unavoidable events. But then we all unite and fight against the consequences, creating positive stories following the sad ones. Here I am thrilled to share a heroic tale of Vibha’s Dallas Action Center. The adult and youth volunteers unitedly worked day and night to succor the Harvey survivors. They worked in various directions at a time to help the evacuees.

The youth volunteers worked arm in arm with Tango Tab, a local non-profit in Dallas, made food packages for distribution. They also set up a booth in front of Petco to raise funds and to get some pet supplies as donation. IMG_3980Here to magnetize people’s attention, they had put on bright and colorful dresses and had live music. At the end of the day, they had gathered plenty of contribution for the animals along with some monetary donations. Some of the volunteers got their hands on making no-sew blankets for the victims. They managed to make more than 20 blankets and were all set to make more as need raised.

This story does not end here. All the volunteers worked at a sorting center, Trusted World as well, where they helped to sort and pack donations, such as clothes, toys, books, etc. for faster distribution. And the center of attraction here were the people from neighboring communities who came forward and joined Vibha volunteers in this activity.IMG_4054 (1)

The essence of this story is that not many organizations are willing to take the back-breaking work that follows receiving the donations. But Vibha Dallas volunteers substantiated that they not only believe in garnering the offerings but are also ready for all the tough grinding that comes with it. In the case of Harvey relief, they performed every possible task to support the survivors so that their lives can be reinstated as quickly as possible.