This is a success story of Jahirul Molla, an 11-year-old son of Sukhzan Bibi (a bidi binder) and Mujibar Molla (a van puller).
After dropping out from a government school because of his inability to focus and lack of inclination for study, Jahirul was brought to Prayash School 4 years ago. Prayash is a remedial education center that works in collaboration with Swanirvar and Baduria Police Station. The police help Prayash by reaching out to local entrepreneurs, asking them to send their child labors to the center for proper education.

Jahirul is an awe-inspiring paradigm of how systematic education can transform a person from inside out. When he first came to Prayash, Jahirul used to be a very distracted and inattentive child. For this reason he abandoned his education; he never found schooling to be interesting. 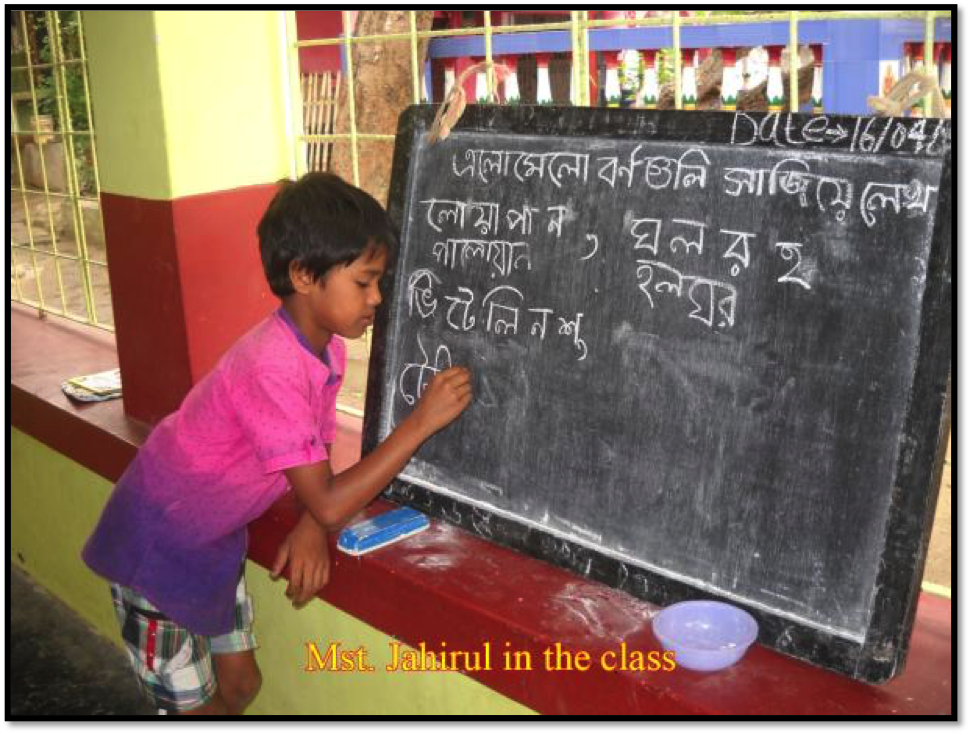 After proper surveillance of Jahirul’s liking and disliking, the Prayash teachers contemplated that he was fond of interactive games, story telling and painting. He had a whole bunch of inbred qualities, which needed to be cultivated. He was very good at leadership, mathematics and art. So the teachers came up with a study plan that would allow Jahirul to have fun while learning new subjects at his own pace. They started teaching him in a way that he enjoyed, using every means to develop his attention in the study.

Today, Jahirul has grown to become a monitor in his class. Besides study, he spends rest of his time in a market; helping vendors with sorting fresh potatoes from rotten ones, applying basic mathematical knowledge he has and earns a decent amount of money to support his family.

Prayash taught Jahirul not only Mathematics but also its applications in the real world. Jahirul also has portrayed a beautiful illustration of how a mischievous and uncontrollable child can be metamorphosed into an entirely different personality; a child who wasn’t even able to sit quietly for a few moments, is now studying with great dedication, leading his class with an eminent sense of responsibility while simultaneously earning a living for his family.

How Vibha, Swanirvar and Prayash are connected?

Vibha has been funding Swanirvar and Prayash since 2006 and 2014, respectively. Prayash school resulted from genuine efforts and initiative of a Superintendent of Baduria local police station. He impelled Swanirvar to open a school for children of migrant laborers since he was concerned about a growing number of juvenile offenders around him. The Superintendent served as a remarkable example by taking such a thoughtful approach towards minimizing young delinquents by providing them with proper education. He even equipped Swanirvar with space in the police station compound to kick-start Prayash. Thus, Prayash school was started on an experimental level to meet with the essential needs of migrant children. Ever since its birth in the year 2014, Prayash has shown a phenomenal success, using its novel modus operandi – innovative, creative and child centered approaches and methodologies, which has been developed and sculpted by Swanirvar in the past 2 decades of work.  After such an astounding accomplishment in Baduria, two other police stations from adjoining districts of Deganga and Swarupnagar requested for similar initiatives. Today, Prayash methodology is proudly being replicated to cover children from 22 tribal schools in West Midnapore district.