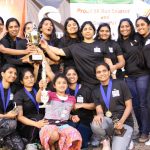 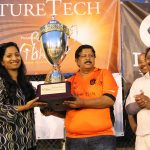 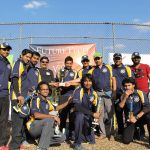 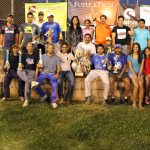 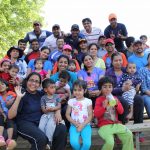 It was Déjà vu for the Future Tech cricket team, almost! Being the title sponsors and one of the best teams of the Future Tech Vibha Cricket Tournament over the years, reaching semifinals and finals on several occasions, they have never won the prestigious cup.  They are often compared to the South Africans as the choking genius of Vibha cricket. Once again, they reached the finals of the Corporate Challenge Cup and batting first they were scuttled out for a paltry 30 runs in 8 overs of the allocated 10 overs. The target was so small – it can be achieved with only 5 heaves across the boundary or sedate nudges in every over – that their opponents Marietta Mahem were sensing victory and visibly excited.

But in the game of cricket, miracles can happen. The Future Tech Bowlers – Niyaz Ahmed,  Surendranath Gandavaram, Atul Chauhan and Ravi Rajput – bowled with such line, length and variation that they gave away virtually nothing to the batsmen. In the second over, the ball from Atul pitching well outside the leg and turning to knock the leg stump of the batsman was the ball of the tournament. The spectators gasped at that and the more knowledgeable ones compared it to Shane Warne magic. Future Tech bowlers never looked back after that ball and their captain, Anj Balusu, rallied the team to an unprecedented victory, by removing the opponents for 15 runs in 9 overs. Finally, the curse was broken and Sravan Vellanki, the Chairman and CEO of Future Tech, was in all smiles lifting the huge cup!

The exciting final on the May 9th made up for all the days lost in April due to the unusual incessant rains in Atlanta. The volunteers of Vibha maintained their hallmark professionalism and kept the teams informed at regular intervals about the weather conditions and made sure that the entire tournament finished in a safe and orderly manner. Srinivas Duddempudi, the coordinator of Vibha cricket this year, said “The enthusiasm with which all the volunteers stepped up week after week and the spirit of the players – some players playing for the cause of the children and some for the love of the game – made it worth our efforts in organizing the tournament. It is inspiring and motivating to see the commitment towards Vibha’s cause”.

Never satisfied with the status-quo, either in making a difference to the lives of children or in the innovative ways they raise funds for the cause, Vibha volunteers changed the format of the tournament this year and split it into two parts – A Star Cup for the first 16 non-corporate teams, and the finalists joining the Corporate Challenge Cup of 24 teams. The Women’s tournament was once again a special attraction with the two participating teams Marietta Mayhem and Willow Vanithas playing with a lot of enthusiasm and sportsmanship. Willow Vanithas won convincingly by scoring 52 runs and restricting their opponents to 29 runs.

The 2015 Future Tech Vibha Cricket Tournament was inaugurated on April 11th at East Roswell park by Mr. Sravan Vellanki, where he unveiled the official tournament T-shirt.  He lauded the volunteers of Vibha and thanked the players and all other sponsors of the tournament. The Star Cup final was played on May 2nd between Syrainfotek Willow Raiders and Columbus Strikers.  Willow Raiders won the match easily by bowling extremely well and restricting their opponents to 26 runs and reached the target losing only one wicket.  After receiving their Star trophy and their individual medals, both the teams gained Quarter-finals berth in the Corporate Challenge Cup.

The Corporate Challenge Cup games had started on the 2nd of May with many of the teams from previous years in the fray as well as several new teams. There was the usual mix of exciting nail biters and one sided games in the initial rounds and in the end the two teams that rose above the rest as finalists were Marietta Mayhem and Future Tech, of which the later prevailed in a nail-biter. The captain of the winning team, Anj Balusu commented “As a volunteer, supporter and participant of Future Tech Vibha Cricket, it has been 14 memorable years of accomplishment with mounting pride, for being able to be part of this tournament year after year, win or loose”

The funds raised from this event will be used to support child development projects in India in the fields of education, vocational training, and healthcare. For a complete list of projects supported by Vibha, please visit www.vibha.org/projects.

Having finished one event that is a mainstay of the cricket enthusiasts in Atlanta, Vibha volunteers are already setting their eyes on the next biggest event – The Paramount Software  DreamMile 2015!  One of the best 5K/10K walk/run events in Atlanta attended by close to 2000 runners and walkers, the DreamMile will be held this year on Sept 19th in Forsyth at Collections Mall. Volunteering in Vibha is a mix of fun and the spirit of helping the cause of underprivileged children of India and USA. Please join us at atlanta.vibha.org.