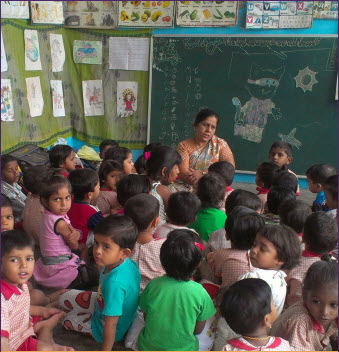 When Sweta and her younger sister were very young, their family was going through difficult financial times. Their parents were illiterate and unemployed. Sweta and her sister never went to a school or received formal education. But the family aspired to do better, and they were approached by CORP – Community Outreach Program in Mumbai – a project supported by Vibha. Sweta’s mother joined the CORP vocational training center to learn tailoring skills. Upon completion of her classes, she took on a small job and joined CORP’s Self Help group to learn other skills. Sweta’s dad learnt to drive a car and started working as a driver. The family was finally able to sustain themselves, and enrolled their two girls in the CORP bridge education program. Later, CORP helped enroll Sweta and her sister into a government school as well as after-school support classes at their centers. Sweta gave her 10th grade board examination last year and graduated with 61 percentile. She secured an admission into the R.J Thakur College for further studies. She aspires to take a job in the banking sector. Sweta’s younger sister is currently in 8th grade and plans to finish her high school soon.

When we think of a 12 yr old with ADD (Attention Deficit Disorder) and from a family living in abject poverty, we wouldn’t expect anything short of a miracle to change that child’s life. Three years ago, Himanshu came to Jan Madhyam with aggressive and confrontational behavior, and was quite uncooperative. It was extremely challenging to work with him. However, this challenge proved to be an opportunity for Jan Madhyam. They developed a program specifically for him consisting of counseling as well as involvement in interactive programs and activities. This program was aimed at helping him control his aggressive and confrontational behavior and become social. It worked! He eventually showed positive signs of improvement. He showed keen interest in activities like gardening. which has a calming effect on him. It also helped him focus and deal with poor concentration and displine issues. He also showed a keen interest in the Jan Madhyam store and enjoyed being behind the sales counter. Today, he volunteers at the store every now and then, and handles sales and payments with confidence. His inclination towards this program has motivated Jan Madhyam to continue developing his skills further so that eventually he can be placed as a sales person in one of the stores. Himanshu was enrolled in one the local schools but he was not keen to be in class with younger children and dropped out. Subsequently he is now given functional literacy at the Equal Opportunity Rural Technical Training and Education  Centre (EORTTEC).

Jan Madhyam’s goal is to bring a challenged person into the mainstream and steer him/her towards a productive and fulfilling life focusing mainly on disadvantaged children. It promotes self-advocacy and self- sufficiency. Jan Madhyam has been a Vibha supported partner since 2003. We stay committed to continue supporting Jan Madhyam’s efforts. As of today, this commitment has benefited more than 25,000 children and adults through training, and with one key focus – life skills training.