This March, Vibha Dallas, in association with MCOR, hosted its 10th Annual Kite Flying Festival. Vibha’s youth group of twenty youth volunteers, along with thirty others, organized a kite flying festival and made it possible in order to raise money, as well as for children to know about the science and history behind flying kites and learn the art of making kites.

It was late in the afternoon. The Spring Sun was high and shining brightly and created the silhouettes which completed the perfect landscape of a “Kodak moment…”

The event started approximately at four in the afternoon, and the volunteers have already set up the registration desk, the children’s activities table (face-painting, etc.), the kite creation tables, as well as tables which featured information on Vibha, how to make kites, and the history behind them. As families started to arrive at the Bob Woodruff Park, the excited children dragged their parents past the registration desk to make a kite that will soar high, dominating the air. Over four hundred people attended the event, and each flew a kite. Dozens of the kites filled the sky, performing a “wind dance” show. The families who were at the festival were not restricted to only the Indian community. All the children, adults, even the seniors, regardless of their gender, delightfully participated in the kite flying, flash mobs, and even the spot talent completion. 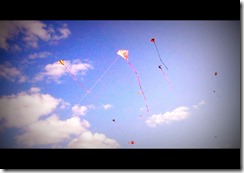 During the actual kite flying event, the volunteers hosted a variety of enjoyable activities, such as face painting for the younger children, “Spot-Talent Show” competitions for people to show off their mastery of an art, Henna sessions for the women, a clown making balloons for kids, or or a flash mob to a song in which some people could join in.

Click here to watch the video of the flash mob dance on the Vibha Dallas facebook page!

During the talent show, there was an open opportunity for people to contribute to Vibha’s cause. Surprisingly enough, the event has raised a satisfactory amount of money. These sub-events constituted to make an absolutely beautiful and inspirational social event in which many people made new friends or got in touch with old ones in addition to simply having fun.

No of Volunteers:30 plus 20 youth volunteers.

This event was a rare opportunity of which people would love to experience, and Vibha has made it possible.