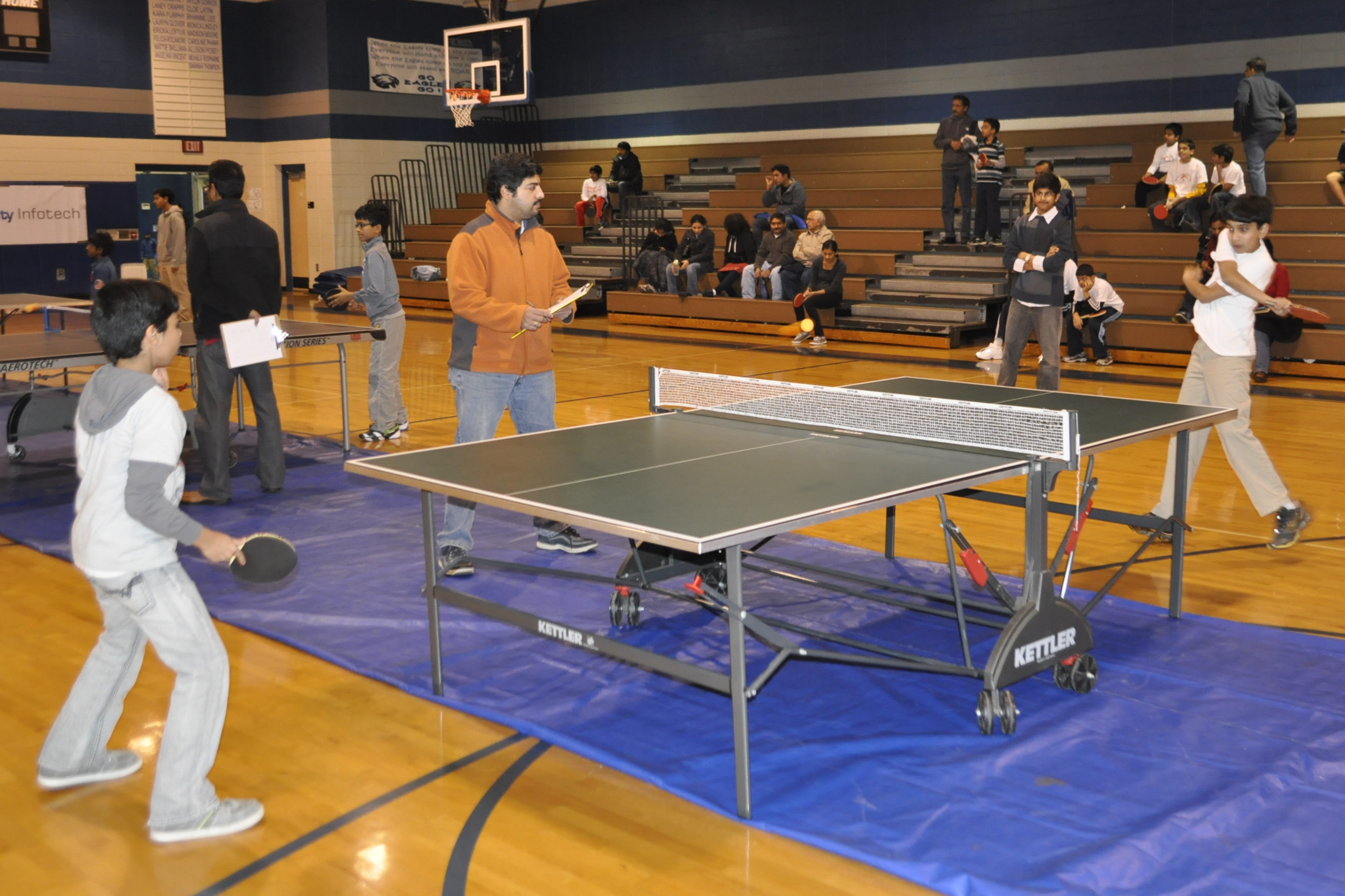 An event at the Vibha DreamPlay 2013.

Innovative. Well planned. Excellent place for fun sport. These were just some of the words that were making their way around the arena, on the 16th of February 2013 when the 10th Annual Vibha DreamPlay was hosted at South Forsyth Middle School.

The Vibha DreamPlay is an annual Chess and Table Tennis tournament. In addition to those events, 2013 also saw the addition of an Art competition, proactively organized by the Vibha Youth to raise funds for projects supporting the under-privileged children in India. The location served well for the artistic delight, intense thinking, and physical competition that took place throughout the day. As the day unfolded, the South Forsyth hallways was filled with a smiling atmosphere – kindergarteners accompanying parents and grandparents – all of the 400 eager participants to compete against each other and stake their claim on the trophies. 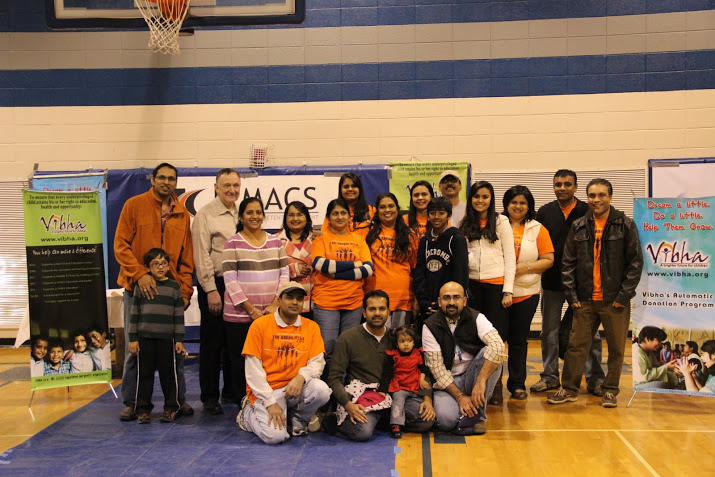 The team in Atlanta who made the DreamPlay happen.

The Vibha DreamPlay 2013 was fully organized by the youth. From initial groundwork to gathering sponsorships and registrations, the event plan and execution was charted by the youth, who were dedicated to giving back to the world. This included informing school clubs and contacting local sports and art academies as well as harnessing the power of social media, such as posting on Facebook and tweeting. The youth team leads Khushboo Sarda (Lakehill Vibha Youth), Manasa Chimpiri (Northview HS Vibha Youth) and Rachana Kotapalli (Alpharetta HS Vibha Youth) along with Volunteer Management Lead (Sanket Mehta) and Publicity Lead (Rishi and Vikas) were also responsible for coordination and planning which they seemed to handle aptly. Deadlines and short-term goals were met as early as December and no stone was left unturned in making the event a major success. The parent coordinator, Priti Sarda, also added to this mentioning, “It was fascinating to see students from middle school and high school, dedicated for more than three months in the tough school environment, to give back to the people around the world.” This was added to by Outstanding Youth Volunteer award winners, Rachana Kotapalli and Deeksha Malhotra, who were proud to be making an impact on the world at such an early age. While performing these activities, the main goal of Vibha was never put out of sight: Vibha strives continuously to create brighter futures for underprivileged children, a motto that has proved itself true by the success of all of Vibha’s fundraisers.

In an effort to make the event even better, the Vibha Youth incorporated feedback given from participants from previous years. Chess was made Rated for the serious players while keeping the original open championship available for adults and new players. The change was welcomed well and there were 150 Chess participants in different categories. TT was organized to start and finish promptly, and the record breaking 200 TT participants were accommodated extremely well. In addition, the youth decided to add another event to the fold this year, with an art competition designed for little ones being appended to the occurrences during the day. The newly added Art Competition also received an overwhelming response and there were 50 artists of all ages putting their creativity on the paper.

The Vibha DreamPlay Chess Tournament saw great attendance from youth players everywhere in the region, with 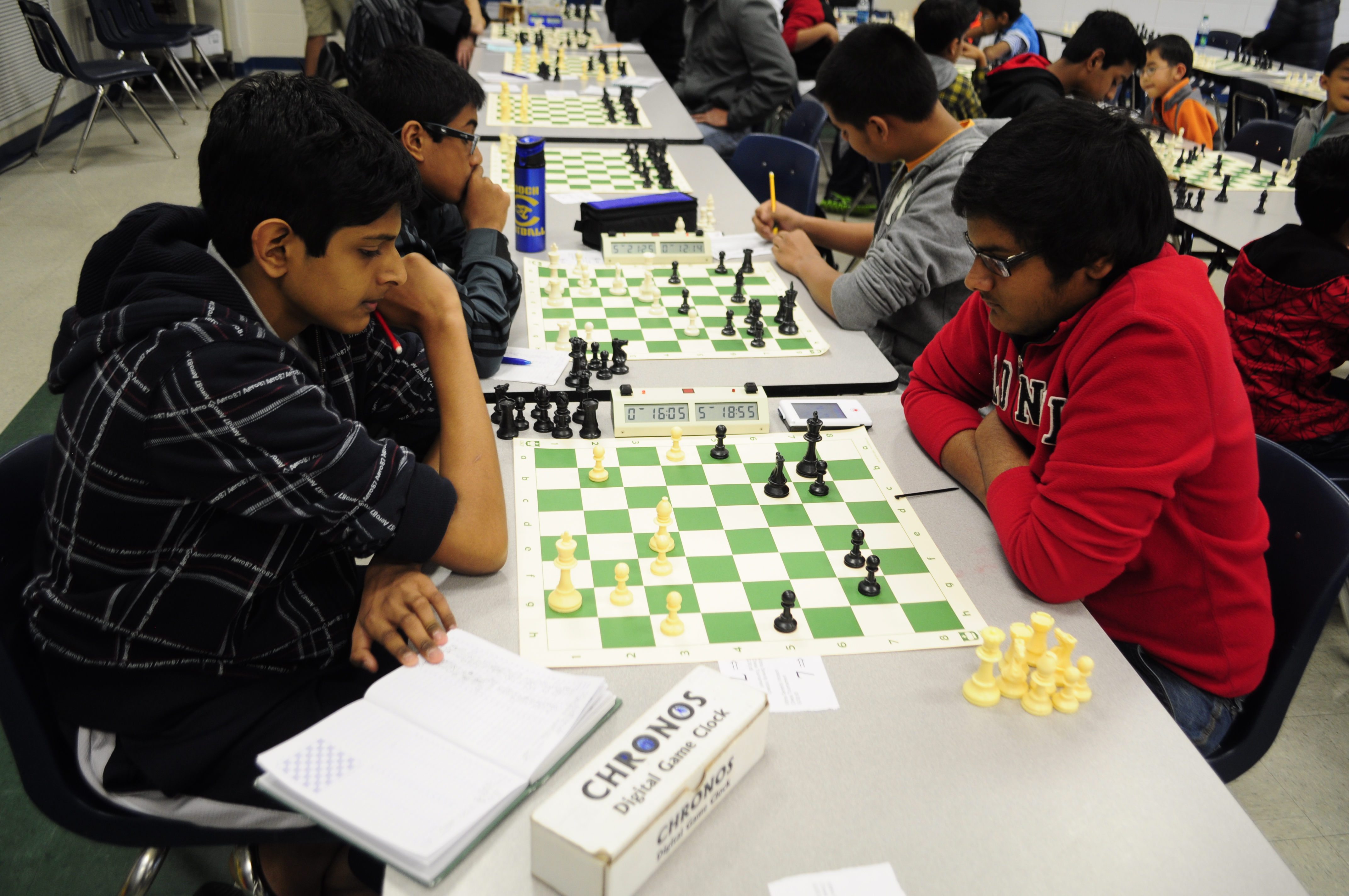 A heated chess game at the DreamPlay 2013.

record turnout in both the rated and unrated competition. One could see novices testing their skills against the most experienced in the game, and testing situations for all sorts of players. Tournament Director Keith Sewell was to thank behind the smoothly ran rated competitions, where many young and skilled chess players had an opportunity to shine. A special gratitude must be shown for Steve Schneider, founder and director of Champion Chess and author of the Scholastic Chess series, who helped coordinate the chess tournaments throughout the day. The Scholastic Rated Champion Chess was won by Shanmukha Meruga, while the Scholastic Unrated Open Chess was won by Rithik Konda Doddla.

Table tennis was also prolific this year, the event bringing in almost 200 individuals and teams. Archana Athalye, a former state level champion in India and founder of Archi’s Table Tennis Club in Atlanta, coordinated the Table Tennis event for the 2013 DreamPlay. She helped coordinate the event remarkably well.

In the 2013 event, the numerous divisions were broadly divided into mens, womens, mixed, and U-15. As the matches unfolded one by one, the players did not fail to impress, engaging the audience and maintaining fair play as their mantra. Krishna Venkatesh bagged the Men’s championship and Kim Fuley became the champion in women’s category.  Srikar Yendapally, Atharva Athalye, Brandon Koh came up winners in the under-16 tournament respectively at Basic, Intermediate, and Advance categories.

Alongside the much acclaimed table tennis and chess tournaments, the introduction of an art competition to the Vibha DreamPlay 2013 saw immediate fruition. The idea for a youth art competition stemmed from the Vibha Youth’s desire to add a contest where young people could express their creativity. Categories were created such that peers of the same age could paint together, fostering friendly competition and communication, with a special emphasis on the uniqueness of art. Rashi Patel (4-6), Shriya Nayak(7-9),  Nikhil Kumar(10-12) and Lavanya Chellam(13-16) were recognized as the winners of the Vibha DreamPlay Art Competition 2013.

The 10th Annual Vibha DreamPlay was a success and the youth’s commitment towards service through restarting the Vibha Youth as well as management of the event is what really made this event click. The event was an excellent example of how Atlanta Vibha Youth is growing stronger and flourishing in terms of event successes. Youth were given full freedom to show their leadership and employ new strategies to make the event more effective. The result: record breaking funds raised and maximum participant satisfaction from the event.

Vibha is grateful through the support it has received in numbers through its sponsors, especially title sponsor K-MACS, and Serenity Infotech as well as financial and physical help to make this DreamPlay a success of immense stature. Srinivas Vangimalla and Dilip Tunki of Serenity Infotech gave away the prizes and thanked the participants. Both noted that they felt it was an honor to work with Vibha for such a noble cause.

Written for Vibha by Sanket Mehta