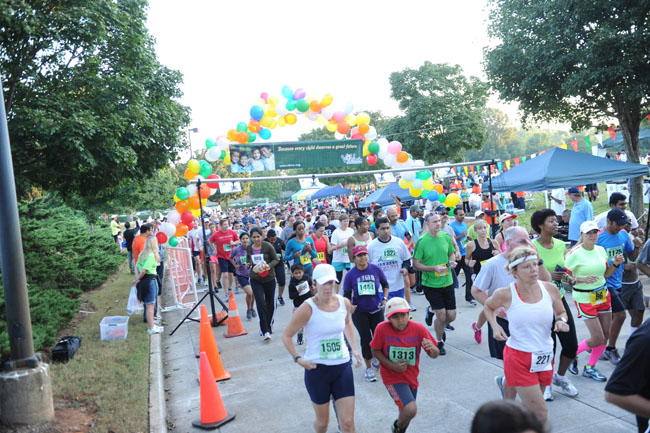 Great, great, and simply amazing! These were just a few of the phrases circulating around on the cool morning of September 22nd, 2012, when the 14th Annual Vibha Dream Mile 10K/5K Run/5K Walk was hosted at John’s Creek for the cause of underprivileged children.

Since 1998 when it was first started in Atlanta and now a national event being organized in several cities in USA, The Dream Mile has become a powerful force for making a difference in the lives of children. The proceeds from the event catalyze social change and seed and grow grass-roots ideas that bring education, healthcare, and eventually social uplift to the underprivileged child. Parts of the proceeds are also given to the local beneficiary – The Children’s Healthcare of Atlanta. The 2012 Dream Mile was no different. Over the weeks leading up to the trademark Vibha event, more than $132,000 was raised, enough to provide 6500 children with a sound education and abundant facilities to truly bring about a positive impact. This year’s Dream Mile moved from Georgia Tech, its previous location, to the State Farm Campus in John’s Creek, GA.

As early as 5:00 am racers, runners, and volunteers of all ages and from all parts of town began to arrive to the campus field filled with excitement. Soon after, as the day unfolded, the arena was packed with many bright faces – five year olds would accompany their parents with a smile and children of the same age would quiver with anticipation on when the race was starting – all of them eager to win a trophy and fulfill a million dreams. The fun-filled event served as an excellent getaway for many adults and youth and as a perfect occasion for all to make a difference.

The beautiful day started off with the two running races, the Vensai Technologies 10K Run and the Datum Software 5K Run, followed by the Pyramid Consulting 5K Walk. Kicking off the event, the chief guest of the event, the Mayor of Johns Creek, Mr. Bodker talked about how important it is to be part of the community and how Vibha was doing exactly that: promoting both local and global child development. Personal motivation is the key to contributing, and he put his own motivation on helping others across best, “At one point of time you have to realize that you yourself are part of something else… something bigger.” The Pyramid Consulting 5K Walk was flagged off by Mrs. Namitha Tirat, Executive Vice President, Pyramid Consulting, who also expressed her commitment towards the community.

In a striking similarity to previous year events, the 2012 Vibha Atlanta Dream Mile was an event fueled by the zeal and effort of its volunteers. From the publicity to the fundraiser targets to the registrations, this event happened because of the dedication of its apt coordinator and the hundreds of volunteers who gave their best. Almost six months before the event, maps were being laid out and goals were being projected on how to handle every aspect of the event with precision and successfully. As the Event Coordinator, Narsimha Rao Manekar put it across well, “I think, therefore I volunteer. Vibha showed me a path where I could join hands with similar minded people and multiply my efforts working towards the cause of helping under privileged children. I enjoyed organizing the Dream Mile back in 2000 and it is an honor and privilege to coordinate the Dream Mile once again this year.” From the monumental move to go local by posting yard signs in the neighborhood to sharing the joy all around by promoting ‘giving to the cause’ to various ethnicities and locals, these were just some of the steps taken by countless Vibha volunteers who worked day and night to make the Dream Mile come true. This included ensuring the event’s presence was harnessed and promoted across the social medium and dedicated teams for registrations, sponsorships, and volunteers were created for maximum ease on event day. Many of these experiences left a resounding impact on volunteers. The Volunteer of the Year, Mr. Rama Riyali, conveyed this feeling particularly well, “I feel honored to be a part of an organization which includes so many selfless and untiring group of individuals who work relentlessly for the betterment of kids. Throughout my experiences, one saying by Swami Vivekananda always came to my mind “arise, awake; stop not until your goal is achieved.” It was no wonder that the spectacular success of the event was a hard earned result of the countless months that went into preparation and effort.

In addition to the numerous fruitful endeavors taken in this year’s Dream Mile, this annual event included the addition of a new category of 10K Run specially catering to endurance runners. Many dedicated 5K runners could now take their sprinting to a whole new level by participating in the Vensai Technologies 10K Run, and the new race generated a very positive feedback. Residents from the neighborhood and first time runners quickly remarked about how well laid out the running course was and how great it was to be part of such a noble cause by doing so much through so little. Alongside the scores of people competed in the 10K Run, 5K Run and the signature 5K Walk. The varied choices allowed people to choose their forte, without the focus being on participation rather than seeking just the prize. As well as presenting a new dimension to running, the 2012 Dream Mile also featured the use of electronic tracking sensors individualized for each runner. This ensured a great-fold increase in the accuracy of the results when compared to the earlier manual recording methods used in previous Dream Miles. While bringing about these modifications, the main goal of Vibha was never put out of sight. The Dream Mile continually strived to create brighter futures for underprivileged children around the world, a motto that has proved itself true by the success of all of Vibha’s fundraisers.

The results of the Vibha Dream Mile 2012 were tremendous. Out of the 1250+ participants, who ranged from all backgrounds and ethnicities, there were 168 adults and children who secured a trophy in the standings. In the newly introduced Vensai Technologies 10K run, Steven Szilagyi scored as the top male runner while the top female winner was Tara Holt after a good standing against neck to neck competition in the category. In a tight 5K run race Madhavi Golakoti was announced as the female overall winner and in the male running category, Ryan Linnane was handed a well deserved trophy after a good, consistent showing. A similar high level of competition and caliber was also seen at the walking 5K. Here, the male overall winner was Aditya Patibandla and the female champion was Madhavi Yeduguri, both putting in immense effort to achieve their victories. Also, a T-shirt design contest that was added as part of the Dream Mile event brought forward some young creative minds.  Out of all the entries received from local schools, K-12, Elyjah Escho’s design from Peachtree Ridge High School was chosen as top winner.   The complete results of these prolific events can be found at www.dreammile.org/atlanta

The 14th Annual Vibha Dream Mile was a success and the volunteers’ commitment towards service through management of the event along with the support of the people, families, and sponsors that helped in the Dream Mile is what really made this event click. The event served its purpose, and as Pramod Sajja, President, Paramount Software Solutions, Inc, Dream Mile title sponsor, put it across, “Let this be the Year of Change. It’s always simple things that change our lives. Take a step forward to making these small changes which create big opportunities for the underprivileged children. Join hands with Vibha in making dreams come true. Change is never measured by quantity but justified by the simple effort and desire put forth. I guarantee the satisfaction of helping someone in need is out of this world. Make it the Year of Change and contribute to Vibha.”

Written for Vibha by Sanket Mehta