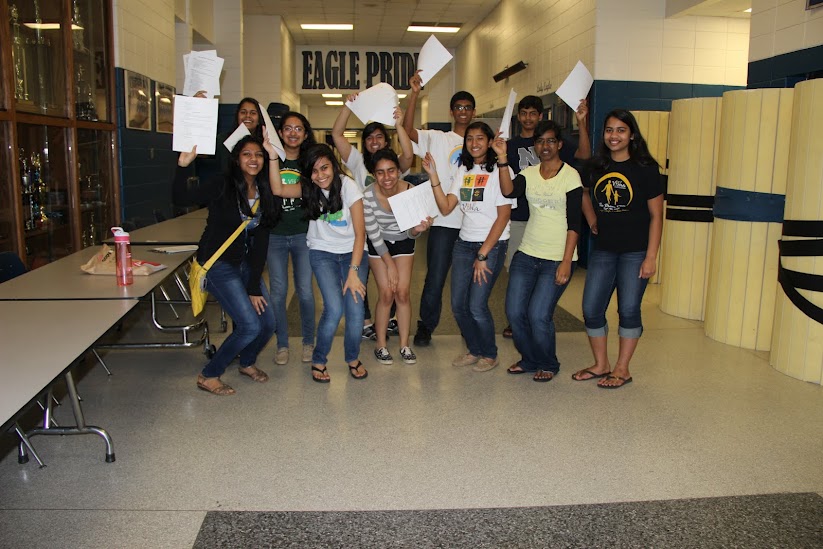 Well organized. Excellently planned.  Top competition.  These were just some of the words buzzing around the stands and ground on the 24th of March, 2012, when Vibha Dream Play was hosted at South Forsyth Middle School.

The Vibha Dream Play is one of the annual flagship charity chess and table tennis tournament hosted by Vibha every year to help raise funds for projects supporting under-privileged children in India.  This year, Vibha Dream Play was organized by Vibha Youth, at South Forsyth Middle School gymnasium in Forsyth County, without whose support, we would have never been able to host such a successful event.  As the day unfolded, the South Forsyth gymnasium was packed with cheerful abundance — young people accompanying adult participants – all eager to compete and stake claim on trophies.

A fun-filled day with indoor table tennis and chess tournaments and various other awareness events was an excellent addition to the schedule of all who attended the occasion on Saturday.

In contrast to previous Vibha events, the Vibha Dream Play 2012 was the first program to be fully organized by the youth. From publicity to registrations to sponsorships and buying prizes, the event was all mapped out by youth, who were dedicated to serving the community. As the organizer of the event, Youth Lead Neeraja Sarda put it across, “No hurdles were too big for our group of dedicated volunteers this year.  As soon as we had our first meeting, a location was set, plans were made, leads were assigned, and a date was chosen. When our first venue brought up problems, we stayed in touch. The hard work of the team and careful attention …ensured that our event was a success.”

From the bold move to change the name from Khel Mela to a more encompassing Dream Play, designed to encourage the participation of people from all ethnicities, and from informing school clubs to mass emailing every week, these were just some of the tasks Vibha Youth focused on to make the trademark event a success. This included harnessing the power of social media, such as posting on Facebook and tweeting. The youth team also was responsible for coordination and planning which they seemed to handle remarkably, even after a delay due to the change in venue and losing two weeks of precious time. The parent coordinator, Priti Sarda, also added to this mentioning, “I was amazed to see that these students who are typical teenager in their behavior, are really talented, and can do anything… they managed everything… those who were there would see they were only having fun, but it was their efforts behind the smoothly run event.” While performing these activities, the main goal of Vibha was never put out of sight, Vibha strives continuously to create brighter futures for underprivileged children around the world, a motto that has proved itself true by the success of all of Vibha’s fundraisers.
CHESS 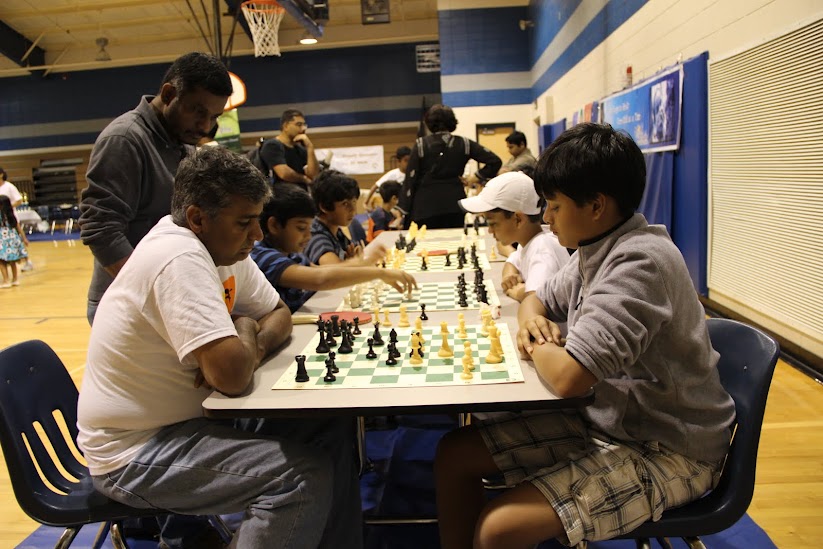 The 2012 Dream Play chess tournament was held in K-3, K-6, K-9, K-12 and open categories, where many passionate chess players had an opportunity to shine. A special gratitude must be shown for Steve Schneider who helped coordinate the chess tournaments throughout the day. Steve was roped in by the Vibha Youth for this year as an excellent suitor for chess, due to his experience as the founder and director of the chess school Championship Chess and the author of the Scholastic Chess Series. Coach Steve is currently developing a network of Affiliate instructors across America to further his vision of providing strong chess programs for children.
The chess tournament was a prolific event, with almost seventy children and adults attending, from the novice to the experienced and people of all scopes. The tournament used the standard Swiss-system format, allowing everyone to continue playing rounds till the end of the tournament and the fact that it was unrated strengthened the maxim of improvement. The primary and elementary school divisions played a fast chess game in which players were assigned other partners as soon as their match ended. This allowed participants to play unlimited matches, the focus being on excellence rather than victory. The open category was built on the idea of sudden death (SD/30 minutes for each game)

The chess tournament was a revelation of mind strategies. The first awards went to Pranav Potluri and Sanjay Shajith for showing technique and temperament, being in the tender years of Kindergarten and First Grade. In the fixed playing categories, Siddharth Vijay and Eeshwar Potluri were named the winner and runner up, respectively for the K-3 divisions. Ainesh Balaga and Sid Balaga were crowned as co-champions in the K-6 category and seconded by Tejas Mirthipati. The K-9 category champion was Rithvik Sarasani and in the hotly competed Open category, Shyam Dasari was deservedly handed the cup while the runner up trophy was presented to Srini Baddam.
TABLE TENNIS 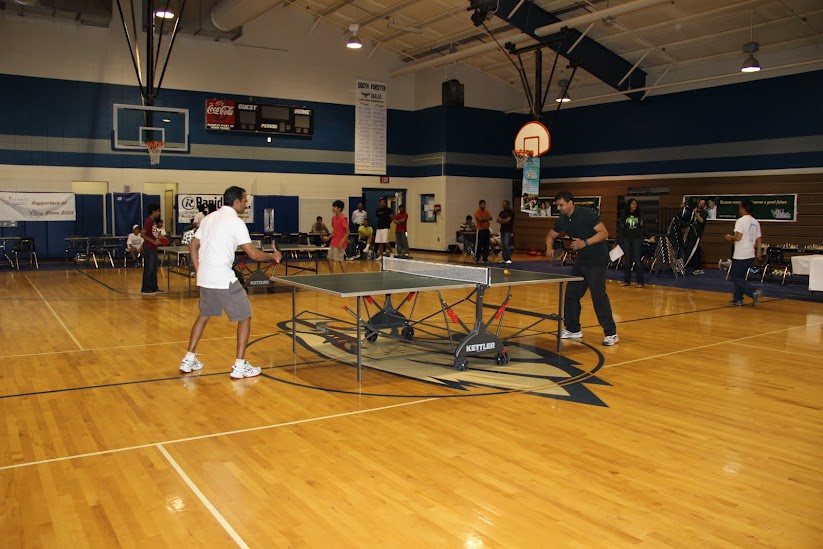 Table tennis was also a crowd puller this year, the event bringing in almost fifty people. The several categories ensured that all could participate and reap for their talents. The numerous divisions were broadly divided into mens, womens, mixed, and U-15. As the matches unfolded one by one, the players did not fail to impress, engaging the audience and fair play their dictum.
The men’s single was a showcase for skill, as it has been since Dream Play’s inception, churning out many bright prospects as well as old masters. In an intense showdown between Vasudev Kallapur and Krishna Venkatesh, Vasudev Kallapur was rightfully awarded the winner of the Men’s Singles event. After several rounds of sweating it out at the table, the trio of Suresh Kanchusthambham, Vasudev Kallapur, and Srinivasarao Kanchusthambham emerged as the victors over runner-ups Krishna Venkatesh, Satish Vasa, and Vinay Uchil in the TT Team Final. In the final mens match, the Men’s Doubles finale, Suresh Kanchusthambham & Vasudev Kallapur triumphed over Srinivasarao Kanchusthambham & Vinay Uchil, thus sealing Vasudev Kallapur excellent showing in the tournament. The women’s and youth playoffs were no less spectacular than the men’s, and with three categories to engage, there was a good turnout and match quality. For the Women’s Singles match, victory was rewarded to Archana Athalye, who won against 2009 finalist Rinku Singhal. The mixed doubles’ final proved to be no less than nail-biting, where Archana Athalye & Mahesh Athalye pulled through to clinch the cup against well played second place Pallavi Sathe & Vaibhav Sathe. In the finals of the U-15 Cup, a commendable performance in an electric match by Yagnik Tadavarthi ensured that he won against Chetan Velivela.
The 9th Annual Vibha Dream Play was a success and the youth’s commitment towards service through restarting the Vibha Youth as well as management of the event along with the support of the people, families, and sponsors that helped in Dream Play is what really made this event click. The event served its purpose, and as Suresh Kanchusthambham of title sponsor K-MACS put it across, “Vibha – its passionate volunteers and the cause… has inspired me a lot. Our company has joined as the title sponsor for the Vibha Dream Play primarily to be part of good team working for a great cause. We will work closely with Vibha in coming years.”
Vibha is grateful through the support it has received in numbers through its sponsors, especially title sponsor K-MACS, as well as financial and physical help to make this Dream Play a success of immense stature.
Come join us. Vibha is not only an organization, but a movement to make a positive difference in the lives of the millions of underprivileged children in India. Charity events like these raise money essentially for schooling for poor children in India and for American children’s fundraisers. Please help us help them by visiting www.vibha.org.