You are here:
One cannot alter a condition with the same mindset that created it in the first place~Albert Einstein

SHE  is a beloved mother, a sister, a daughter, a wife, a friend.

What part do we play when the very right to exist is taken away from the female child?   This is a question we must all ask ourselves in the wake of the continued practice of female feticide and infanticide—the practice of killing unwanted female babies, often brutally— in the 21st century. Our silence on the issue, and our inaction, signal an implicit compliance with such practices.
Many voices have been raised against this atrocity.   One such voice is that of Nayantara Pais Caputi,  an award winning short film-maker originally from Bangalore, now based in San Francisco.  Through her  documentary film in the works, Petals in the Dust: India’s Missing Girls, Nyna has set  forth on a mission to  raise awareness about the practice of killing the girl infant/child in India, and it’s far reaching consequences.   The documentary is deeply personal for Nyna, as her own efforts to adopt a baby girl from India, and the ensuing journey of discovery, set her on the path to bringing this issue to light to the rest of the world.
Nyna  graciously granted Vibha an opportunity recently to speak with her about her film.  Here are some highlights of an informal Q & A with Nyna.
Vibha:  Hi Nyna, first of all, thank you so much for taking the time to speak with us about your film, and for making the effort to bring this important issue to light.  Could you share with us what compelled you to make this film?

Nyna:  My husband and I wanted to adopt a baby girl from India a couple of years ago.  I was under the impression that it would be an easy process, because I thought there were lots of girls available for adoption in India. At one of the orphanages we visited in India, there was a lake in the vicinity, and the supervisor mentioned that before the orphanage was built, baby girls were often drowned in this lake.  The orphanage now provides parents with an opportunity to drop their unwanted children off.

I was saddened to hear about this and when I did some research was shocked to find several reports by the UN, that over 7000 girls are being eliminated in India daily.

My husband and I both have film-making backgrounds, so we decided that this is our mission, to create awareness of this issue, and hopefully, find solutions and bring about change through the powerful medium of film.

Vibha:  What is the mindset of the people who pursue this practice?

Nyna:  Overall, there is a centuries old culture of the male child being regarded as superior.  Among   the poor in India today, lack of education, economic reasons, such as  inability to provide dowry, and limited access to social and health services, such as orphanages for unwanted children and adequate adoption agencies, drive the practice.   Among   the affluent who can afford children, and have access to modern technology,  it is practiced because of what has been ingrained by cultural norms, where the male child is looked upon as a status symbol.

Vibha:   What impact is female gendercide and the skewed female to male ratio having on the most affected areas in India?

Nyna:  The repercussions of this gender balance are already affecting women and children. In some parts of India where there are already fewer women than men, child marriage is on the rise , there is an increase in violence against women and trafficking, and bride buying where one woman is often married to more than one man.
Vibha:  Gender based abortion and giving or taking prenatal tests, including ultrasound scanning, solely to determine the sex of the fetus was criminalized by Indian law in 1994, with stiffer penalties enforced in 2002 which include fines as well as imprisonment.  Yet these practices are still rampant in many parts of the country. Can you shed some light from your work on this film as to the government’s effectiveness in curtailing this criminal behavior ?
Nyna:  Though the government has policies in place, not enough is being done to enforce them.   There needs to be wide scale action and support, politically and socially, to stop this practice completely,
Vibha:  What are some of the difficulties that you face in the making of this film? What would you like to see happening as an outcome of your film?

Nyna:  We are now in the process of actively garnering support and trying to raise funds to complete the film, which is in the pre-production state.  Fundraising is really the hardest part of making this film and we hope more people and organizations will come forward to support this film. Apart from various fund raisers, last year the Petals in the Dust team founded the annual Global Walk for India’s Missing Girls to create global awareness of this issue.

The purpose of the film is to create awareness, in India and on a larger, global scale.  In this day and age of social media, by educating people about this issue, I am hoping that it will lead to change on a bigger scale than I alone can bring about.

You can  donate to Petals in the Dust here: http://www.petalsinthedust.com/Donate2.html

To learn more about Nyna and her film, Petals in the Dust: India’s Missing Girls, visit: www.petalsinthedust.com or e-mail petalsinthedust@gmail.com

For more information on The Global Walk for India’s missing Girls, visit: http://www.petalsinthedust.com/The_Walk2.html 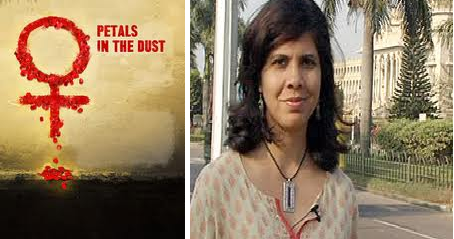