By one definition, autism is defined as a developmental disorder that appears in the first 3 years of life, and affects the brain’s normal development of social and communication skills. At first glance, it seems relatively harmless. It doesn’t affect regular bodily functions, it doesn’t cause deformities, and it just affects social and communication skills. But give it some more thought. How many days have you had when you haven’t communicated with anyone? Think about how many social interactions you have every day – with your family, with your friends, with colleagues, and with everyone from the store clerk to the parking attendant. Our daily life runs on communication and the skills are somewhat engrained within us. Can you imagine life with impaired communication skills? I couldn’t.

Growing up in India, I had noticed that most mental disorders were grouped into one big chunk named “mental retardation”. People didn’t really care to understand the difference between the slew of different disorders that affected the human brain, unless they have a near and dear one who is affected. I had also never heard of autism, until I came to the United States. Does that mean that it is not as prevalent in India? Or that people are not aware of it?

“While the disorder is not rare, the majority of autistic population in India has not been diagnosed and does not receive the services they need. This problem occurs in many countries, but is especially true in India where there is a tremendous lack of awareness and misunderstanding about autism among the medical professionals, who may either misdiagnose or under diagnose the condition.”(www.autism-india.org)

This also brings into light another problem, that there is a sizeable percentage of the medical society in India that may not be aware of autism. Although there is no cure for autism, the symptoms of autism can be managed with intensive and appropriate treatment program at a young age. This makes awareness about autism even more important. If people are able to discover early signs of autism and get support for their children, then the chances of the child facing problems growing up is minimized.

This brings us to the next question, “my child has autism, now what?” Even if a child is diagnosed at an early age, are there facilities in India that can provide the optimum support? There are special schools, but very few if any that are focused toward treating children with autism. In a country where availability of basic education is a growing problem, it cannot be surprising that specialized education is rare. However, demand will give birth to supply. As awareness increases, diagnoses increase, and the need for special education heightens, and as a result services to cater to the need will also increase.

Vibha supports projects like Janmadhyam, Shristi – Chiguru, and Prayas among others to contribute to the education and well being of mentally disabled children. Janmadhyam is an award winning NGO in India that strives to bring people with disability to the mainstream by promoting self-advocacy, mainstream employment, and self-employment through training, and Shristi is a Bangalore based academy for mentally challenged children and children with autism. As agents of change, the least we can do is talk about autism, and ensure that our friends and family are aware of how it can impact affected children. April was Autism Awareness month and the fourth World Autism Awareness day was celebrated on April 2nd 2011. Awareness is the first step in every problem solving journey. Let’s take that first step in hopes of developing a more understanding nation for families affected by autism. 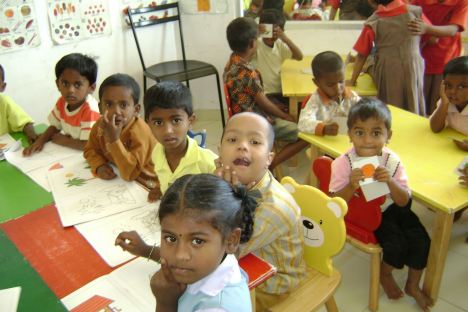