You are here:
– E S Ramamurthy  [Founder of Sikshana Foundation]

I visited the school at Kothavarapalle in the Madanapalle cluster recently. This one looked no different from the others till I saw a box in the office marked ‘Life Line’. Curiosity drove me to ask the HM what this so-called life line was about. She told me that it contained small items like pencil, crayons, scale, eraser and stuff like that which the kids need on a daily basis. Anyone who happened to come to the class without one of them – either because they could not buy or they forgot for the day – can help himself/ herself to it from the box. The box is kept open at all times and the kid does not have to ask for permission from anyone to avail this facility. The box is kept stocked at all times by the teachers. It is an ‘ honor system’ that is observed scrupulously by the students; losses are rare if ever!

With Sikshana in the school, the stocking is done from our funding; the teachers do not have to foot this expense. The kids know this – that if they take away one it is not the teachers who would suffer the loss. Even then, the system is functional with the same level of honesty! 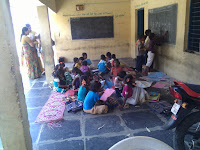 It is amazing – and moving too in a way- that you find such a culture amidst kids living in acute poverty. Often I had been asked during my talks elsewhere whether we are doing enough to infuse a sense of values among the students under Sikshana. With such kids, I think it is we who have something to learn from them.  If you recall the case studies quoted by Levitt in Freakanomics, I do not have add much.