Three year olds in Ganne, a village south of Allahabad eat dried mud and silica because they are hungry. Tribals in Madhya Pradesh are increasingly found on the doorsteps of hospitals and are being refused treatment because of their social and economic conditions. Even as you finish reading this sentence, 5 more people in the world have died as a direct or indirect result of malnutrition, according to the United Nations economic and Social Council. On an average they estimate that malnutrition kills one person every second, 4000 every hour, and one can do the math for the rest. India tops the list of under-nourished countries way above Sudan, Angola and the rest of sub-Saharan Africa. India contributes to more than 5.6 million child deaths a year, more than half the world’s total. The finance minister has promised an economic growth rate of 9 percent in the following year, an upturn from the global recession, and yet political parties continue to disregard this ubiquitous evil, and the death tolls just remain statistics.  Even after almost a decade’s advocacy, why is “The Right to Food” still only a vision? 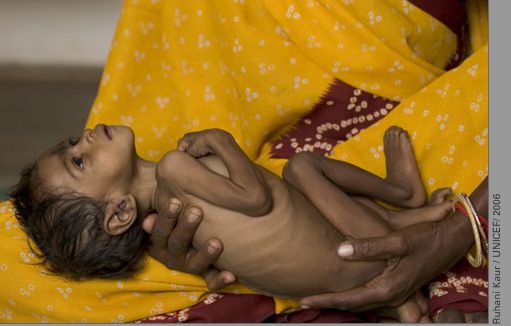 The debates still rage in the Indian Parliament over the passage of such a bill. Hard core activists believe that India can afford to feed its poor for free, and that it would only cost about 1 percent of its GDP to do so. It is a question of prioritizing issues and deciding where to spend the money. But, unfortunately it is not quite as simple as allocating a budget, a view shared by Dr. Kaushik Basu, the Chief Economic Advisor of the Finance ministry. According to him, simply throwing money at the problem cannot be afforded by the country. For any budgeting to be effective, we need a cleaner, corruption – free and responsible delivery system. But, that is not all…

The murk runs lot deeper than this. Decades of poorly planned laws and un-minded development in the name of progress have been few other reasons for the exponential escalation of this problem. For instance, tribals who have been historically used to hunting and fishing in their forests for food are now banned by law from doing that and hence have been forced to buy bread and vegetables from local markets. For those “lucky ones” who have procured small farm lands to grow crops, the soaring fertilizer and seed prices no longer have a sustainable cost- benefit ratio. The public distribution shops at the ration stores have cut down a family’s supply from 35kgs to 20 kgs of rice a month. In some states, these shops are only open 3 days a month which means that if some one is late for one distribution day, his family can go hungry for a week!  “Right to Food” seems a long and daunting task.

After years of cross discussions, we have at least taken a step in the right direction with regard to the right to education. But, what use is guaranteeing education to someone who may be too weak to drag oneself to school or pursue anything with passion and vigor, if  one’s stomach is empty? With every step forward, we seem to need to take one step back and re-examine our situation. How far back do we need to look before we can begin to move forward?

Malnutrition in the country by some estimates lead to an economic loss of $29 billion a year, about 4% of India’s GDP. Lack of basic nutrition is in fact a much more serious and urgent problem in need of pro-active and aggressive solutions.

What can “Right to Food” provide?  A food security act may provide food at subsidized cost for very poor families.  Those unable to obtain food may go to a court of law to demand food and the responsible officials may be punished for this offense. Even if such a law is enacted, I would be interested to note how the law would fairly distinguish those who are really in need of food, and those who are not, and how accessible the court is to such people. It would be ironic if the plaintiffs need to wait for ten years for their plea to be heard before they can get food and corrupt officials have meanwhile deprived other families of more food. We undoubtedly need a serious reformation in the way we treat corruption in our society. The right to be heard in a court of law within a person’s life span is still a distant prospect for most common individuals of the society. Where do these reforms need to start? How many reforms do we need before each right can be a reality?

Although we have a long way to go before every citizen can get adequate food of good quality, it cannot be denied that there have been a few successful measures taken. The Mid-day Meal scheme is one such initiative, and has been well adopted in all states. Albeit the presences of issues like food quality, there has been slow progress. There are some NGOs who solely work for the eradication of hunger and malnutrition. The Akshaya Patra foundation is an example of exemplary work. From feeding 1500 children in 2000, today they feed over one million children in the country every day. Vibha also supports campaigns against malnutrition and funds projects that feed children and their families as an integral part of education. 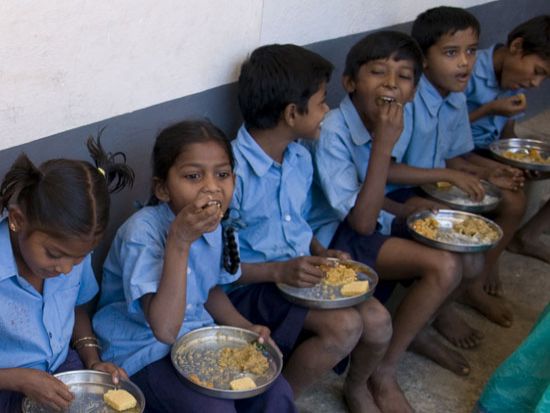 However, this is not enough! The ten year old campaign needs a new spark and more support. This can only be achieved with more awareness. It is a debilitating epidemic for the country and her people, and it is about time we stand up to push for a change.

The views expressed are solely the views of the author and not Vibha.