I believe in signs. Which is why I had to be writing this at this precise moment; cocooned in the emotion I am feeling right now.

Saturday, October 16th, 2010. This day gave me a perspective for which I am grateful. Twelve long drawn out hours passed me by, in a heartbeat. After a hectic day, I ended up in the Centerville gymnasium on Saturday afternoon. Until the time I got back under my covers at 3 A.M, I was ecstatic. I was running on a high, fueled by the energy of my fellow Vibha Volunteers, each and every one of them, rock stars in their own right. There was an aura about the day, a feel in the air, and a contagious kind of energy. 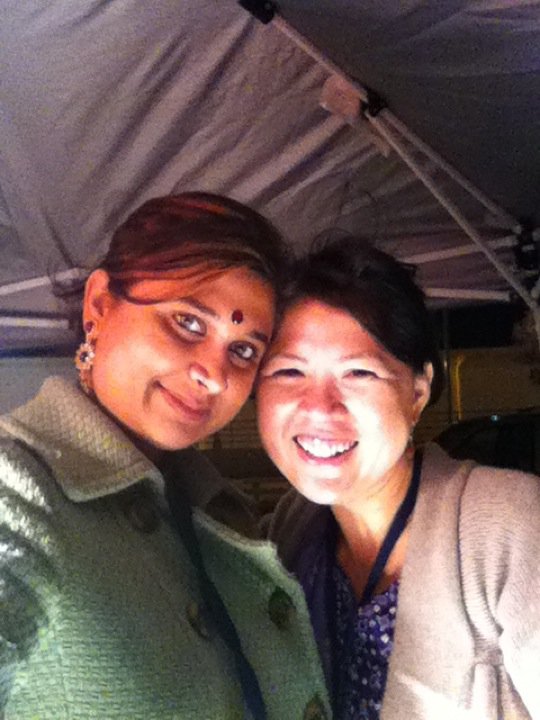 Let me set the scene for you on this day. It was the third and final dandia event of 2010. The afternoon started with volunteers setting up the venue. In a few hours time, the dull, boring gym was transformed in to an ethnic setting. For those of us who are desi and have had experiences growing up in India, this was akin to the anticipated preparatory ritual before the start of a festival. There was a buzz around, that is difficult to capture in words—people laughing, music playing softly from an iphone, clinking of ladders, water bottles being passed around, chairs being moved, decorations being hung up, nails being hammered, scissors and tape exchanging hands and then exchanging hands again, people yelling across the gym for more thumb tags, the start and stall of car engines, things being transferred, then transferred again…

Before I knew it, it was time. We had just enough time to grab a cup of chai in the drizzle. Yes, the weather changed this day, as if to test the resolve of the passionate volunteers. It was a cold, dark, chilly night with an occasional shower of rain. As if in response to the challenge posed by the change in the weather pattern, the volunteers were transformed from casual wear to appeasing ethnic apparels before show time! The women dazzling, the men handsome, everyone in their Indian finery, adding last minute touches to their tasks when I heard someone call my name, “Make sure you have dinner, Shivani.” It was like I was transformed then and there, to a place that is always close to my heart, ‘Home’. It is this kind of compassion and care for another that makes a person a Vibha Volunteer. It is this kind of “apnapan” (loosely translated—closeness or sense of belonging—there is no word in English that does justice to this term) that makes a person a Vibha Volunteer. I do not know how each of these volunteers live their life on a personal level, but I do know that when we are all together volunteering; there exists an ‘apnapan’ that only comes with sharing a mindset, with Vibha as the source of that mindset.

Show time! What a display of professionalism and efficiency from every volunteer with a smile on their face. From parking in the cold, to ticketing and ushering in the chill, from crowded food lines to security detail, from judging events to managing a kid’s corner, everyone did their part and it all came together as envisioned—a sold out, well organized, fun event.

While at the ticketing counter, a patron walked up, and waited patiently with a smile, while I completed the formalities. As the seconds went by, I realized that the smile was not a casual one but rather attached to something familiar. Watching my puzzled look while I returned the smile, he said, “Kalakaar!

‘Kalakaar’ was the event with which I started my volunteering journey at Vibha. An event that focused on creativity, ‘Kalakaar’ or ‘artist’ provided a chance for the young and the old to showcase their creative talent in fields like story writing, painting, and photography. As recognition hit, both of us broke out in to a huge grin. “Thanks to you”, he said, “my son got a chance to get in touch with his creativity and has been exploring it ever since.”

Taken aback for a second, with the magnitude of the compliment, I responded, accurately so, “Thanks to Vibha, for providing the opportunity and thank YOU for stepping up and taking a chance with something new.” We exchanged a few more pleasantries and then he promised to register again next year with Kalakaar and headed indoors to the sounds of garbha and dandia. As he left the now empty ticket counter, I heard myself reiterating the phrase, “Thanks to Vibha”.

I believe in signs. I do, however, believe more in its source—the human mind. I believe in Vibha’s endeavor, the desire and need to nurture the human mind. Vibha for me has been true to its mission statement. Vibha has managed to educate, empower and enable me to make a positive difference in the life of an underprivileged child. All you have to do to complete our mission statement, yes, OUR mission statement, is to wish. Wish to make a positive difference. You pick your reasons, whatever it may be. We’ll give you our ‘apnapan’. Whether you do it for love, with empathy, or for self-gratification—your reasons while important are immaterial as long as you wish to make a difference