The Dallas Kite Flying festival – A large crowd puller! How did that happen?

The kite festival in Dallas is usually one of those fringe events that is conducted every year to gain visibility in the community and spread awareness and encourage folks to join our volunteer ranks. This year, the event was held at the Bob Woodruff Park in Plano, under spring skies dyed to a robin’s blue perfection.  The newly sprung leaves sparkled with dew drops even in the late afternoon.  The woods around the venue pavilions exuded serenity and no one would have jumped if Christopher Robin showed up with Pooh and friends to the event. 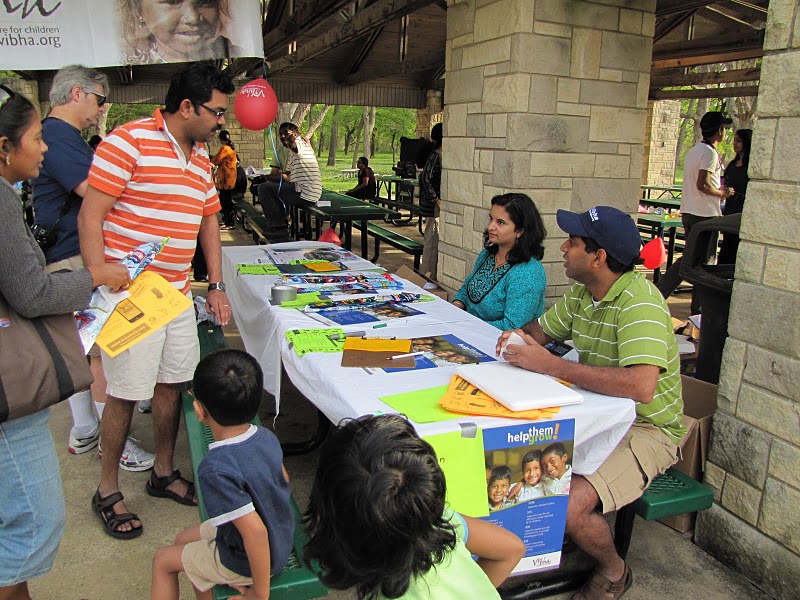 The volunteers set out the direction signs from the main streets, handled the booths for the face painting and kite selling. They got all the miscellaneous paraphernalia for the Easter egg hunt in order and waited for the masses.  It was 4.30, the advertised start time, and in spite of the slight change in the venue at the last moment, the people arrived….. And they came and they came and they came.

We ran out of kites and had to run get more. The Easter egg hunt had to be organized in batches and went on for the next three hours as kids screeched in delight about their found treasure. Kites soared jostling and bustling for airspace. The face painters were busy the entire time and there were even winding lines that formed in front of them. In 2009, we managed to attract a small crowd of about 75, but this year a whopping 400 people arrived for the Kite Flying Festival.  We were completely unprepared, baffled and startled by the number of people who arrived.  Turns out that there was a reason after all and it was all the marketing effort that was put into the event. Mallika the event lead, shares with Vibha Scope her experiences and the secret behind how to draw such a large crowd for events.

Sheeba Rohini: This was your first event for VIBHA. How would you say your experience was?

SR: However, we managed to draw such a strong gathering for the Kite Flying Festival. Was there any secret to it?

M: The secret is networking, networking and more networking.  We basically went through the City of Plano and attached ourselves to their Multicultural outreach arm.  This helped a ton with getting the word out.  We also found out about other kite flying festivals in town and advertised there. And then there were the usual fliers, radio, websites and word of mouth. I believe that partnering with the city may have made the difference in the turnout.

SR: How did you find out about ‘partner organizations’ and how did all that work?

M: The Dallas Action center already had some of the relationships in place with the City of Plano, as we do divert 10 % of our collected funds to them, which is also our local beneficiary. Through this, and other events, we got leads into the city of Plano.  Plano has a multicultural outreach program called MCOR that basically promotes various events and organizations operating in the city.  I made sure that I took advantage of this and attended their meetings to present VIBHA and our Mission. They decided to support us and  ran an article mentioning the Kite Flying Festival in the city newspaper.  In addition, while at these meetings we had the opportunity to meet other fascinating groups in the city. One such group was the CAAHF, Celebrating Asian American Heritage Foundation. We partnered with them and they advertised our event and we reciprocated the favor.

SR: What other venues of marketing would you pick the next time?

M: Partnering with other neighboring cities and extend this same networking to other suburbs so as to get larger coverage. The Kite Flying Festival can definitely be made into a bigger event.

SR: What would you say about the experience that you wished was different?

M: I really wish that we had a better method of acquainting new recruits into the process.  Every Action center probably needs a play book of sorts, where all the ABCs of an event are put together into a file along with a project plan and time lines. This can become the guideline for the event to be followed by new event leads.