The cricket carnival event recently conducted at the Minnesota action center was a grand success. The event was very well received in the community and feedback from the participants and spectators was unanimously positive. The participants were impressed with the organization and professionalism of the tournament. The event was conducted at Minnesota for the second year after a good start last year. Twenty teams participated in the tournament, up from 12 teams the previous year. The event generated nearly $6000 in total revenue and a net revenue of nearly $4500. The net revenue was more than twice that was generated from the first year. There were a number of things that were done strategically ahead of time that ensured the success of the event. 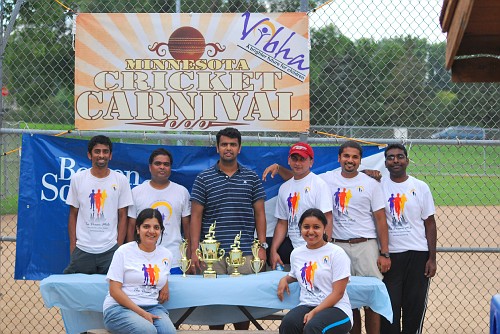 Some of the strategies employed and challenges encountered in organizing this tournament were :

Partnership with tennis ball cricket league – As early as six months ahead of the game, a deal was negotiated with the hard tennis ball cricket league. The league agreed to provide a break in their schedule on the dates of our tournament. Moreover, they allowed us to actively promote our event in their mailing lists. The deal primarily happened on account of a new volunteer (Ramji) who was playing in the league for the past 5 years. On account of this engagement, nearly six new teams participated from the league raising in excess of a thousand dollars. A fact that needs to be noted here is that, the management of the hard tennis ball cricket league was associated with Vibha Minnesota a number of years ago. They were looking for avenues to do more charitable work and they found this partnership an excellent way to engage in the game while helping a great cause. This aspect of the tournament is something that needs to be emulated across the nation. Vibha volunteers organizing their cricket event can try and engage the leagues in their local communities to provide them an avenue to do charitable work while playing the game. Another interesting aspect is that we benefited largely from the diversity of the organizing team. Ramji, who negotiated the deal with the Tennis ball league is a new volunteer but his past experiences with the hard tennis ball league was a strong asset to our team.

External Fundraising – To deepen the revenue generated from the teams, we decided to engage the teams to raise funds rather than just pay registration fees. In order to accomplish this, we created a tiered strategy to provide incentive to the teams. The strategy goes like this:

a. Raise $150 to participate in the tournament

b. Raise $250 for participation and get free T-shirts

Along with this strategy, we created a method to engage the teams. We had a fundraising lead who constantly communicated to the teams about fundraising and how it can be done. Every week to 10 days we sent out e-mails motivating the teams to raise funds giving them tidbits of information about what their money does.  Many of the participants had limited exposure to the concept of online fundraising. There was a lot of education involved in how the system works. Explaining that they could play by just spending time to support the fundraiser was challenging. However, towards the end, there was a good momentum built up and many teams began to raise funds in excess of what was required to participate. Two teams reached the $550 level, eight teams reached the $250 level and the rest were between $150 and $250. The success of this strategy is not only in the additional revenue that was generated over a regular registration fee system, it is in the number of people who the fundraiser reached. Over a hundred new donors participated allowing us to build a relationship with them for future engagement.

Opportunities existed to improve certain aspects of the tournament.

Publicity- We did relatively little to spread the word in the community about the event. Also, there is considerable interest and curiosity in publicizing the event in the local news channels. We did apply for coverage of the event but did not pursue it aggressively. Good publicity ahead of time will allow us to easily expand the number of teams reached. Next year, expanded publicity will be our approach to reach our target of 32 teams.

In summary, cricket offers significant opportunities for expansion. In many U.S cities, Vibha volunteers  have a unique opportunity to offer this tournament in a quick knock-out format. Association with local leagues and adopting an external fundraiser maybe new ways of significantly enhancing the revenue generated from the event. The organization of the event is reasonably effort intensive. Action centers interested in conducting this tournament may significantly benefit by learning from other action centers who have experience conducting this tournament.

Please visit: http://minnesota.vibha.org/cricket for the information portal and http://active.com/donate/cricketcarnival for the fundraiser.