Life as an Easterly Beast!

Ahhhh, summer. The lazy days, the “mom-aggravating” bedtimes, and the heat! It didn’t seem so bad, especially with the tempting ternion of months out of school, until the glaring eyes of the thermometer that forever seemed to indicate 104°F.  But who was to let such a petty thing stop us? We were the Easterly Beasts, a coterie of seasoned cricketers that were in it to win it. Of course, as it is inevitable and more or less expected with a congregation of a bunch of adolescents, we have priceless episodes of our own. One day, we were practicing for the first match-up with the Wizards (a competing team) and as a fielder, I was staring intently at the bowler, as our coach had commanded. I’m staring at Rishi Gonuguntla, who happens to be bowling, and a split second later, the ball makes its way past the stumps to the wicket keeper, Rahul, and Rohan screams “WATCH OUT!”. You know those Bond movies when everything seems to be going in slow motion?  It occurred to me, but I suppose it didn’t register that I probably needed to get out of the way.  Not quite fast enough, anyway, if I had learned anything from Daniel Craig. Thud! The ball strikes my right ear, rendering the right side of my face numb.  Being one of the opening batsmen for the next match, I couldn’t help but unconditionally make a classic sarcastic remark: Brilliant, just brilliant. 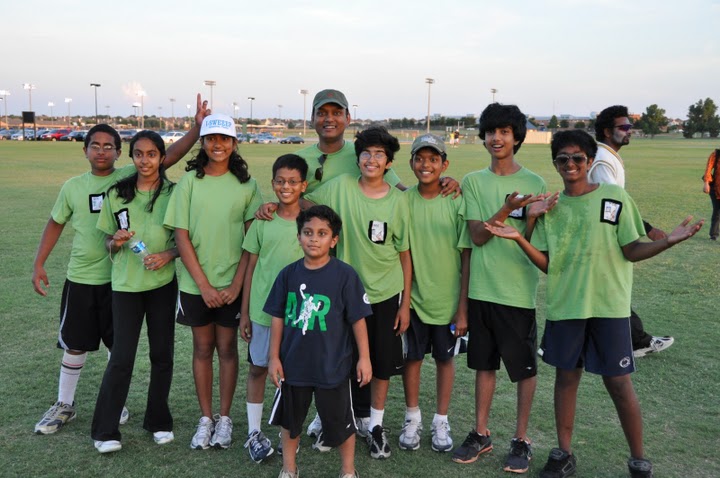 The event itself, the Dallas Cricket cup, held in June, was a phenomenal success. Sponsored by VIBHA, in its fourth year running, it’s quite the event here in Dallas.  More than 350 players showed up, with fiery determination in their eyes and spirit in their hearts.  The game was an eight over match and was played with an unforgivably hard (and heavy) tennis ball, that, indeed, left bruises upon the hands of many. With eight to a team, the competition was intense in the men’s bracket with twenty-four men’s teams in the running for the trophies.  The tournament would separate the elite from the mediocre, and decide who was the best of the best.  There was ardent enthusiasm in the crowd, coupled with the smells of classic Indian munchies and the latest energizing Bollywood tune blasting overhead. The refreshments, namely the water bottles, were utilized as “fun-filled canisters of entertainment,” leaving a number of the Easterly Beasts soaked. Not only was the cricket cup boisterous and convivial, but quite fruitful in the revenue generated, and the like. Indeed, the cricket cup is quite the event to anticipate and look forward to by everyone.

Besides the hours of fun that cricket has to offer, another part of it was the fact that it united the Indian community.  Forming a team was a unique experience, as it taught us how to promote a cause and show leadership.  Many friends were made, and soon, new faces showed up on the team.  After spending hours handing out neon-orange fliers at parks and Vibha events, the experience was well worth it. We called oodles of people, with the initial intent to recruit whoever we could. It took quite some time: after calling five people, four flat out said no, while the fifth said “Maybe.”  After calling our friends, and our friends’ friends, we were able to pull together a couple of people and soon the team was formed.  This was April of last year.  We committed to practicing twice a week at a local park, while honing our skills as seasoned cricketers.  After competing in the cup last year, it was clear that we needed more practice. We were good, but not great.  After polishing our game throughout the year, we were finally ready to compete this year in 2010.  The energy tremendous and the ambiance extremely vibrant, the Vibha Cricket Cup was in full swing as the team sat under the pavilion, with nothing to restrain the vehement vigor of the crowd except for the universally dreaded summer heat.

The competition was intense, and the stakes high, but of course it’s important to remember that the underlying reason for this event is to raise money for children less fortunate than us.  Not everyone has the same kind of opportunities as us, and it is our responsibility to help out. Every penny contributed goes towards making someone else’s life better, and doing that fills you with a sense of idyllic happiness, you know?  The mere prospect that you changed someone’s life by showing your support is very moving and uplifting. That’s what VIBHA is all about. Perhaps the greatest things in life are the simplest and by contributing something to help, you can brighten someone’s day.  And perhaps alongside your charity, with the attained contentedness you gain, the day that you brighten will also be your own.