We all know several people working in the IT industry, and also know how busy their work lives can get. But seldom do we meet, IT people who have invested a major part of their time to do something for the people of their country and the community. Meet Vijay Vemulapalli, Secretary and member of Vibha since 1993. He has been a key member who has played a very critical role in the growth of Vibha on several fronts. Read on about his enriching journey and his fruitful experiences at this wonderful organization. 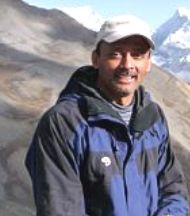 How did your Vibha journey begin?

In 1993, I decided to spend a part of my life to the betterment of the society and in particular to give back to India, the country that has given me so much. The cause of children, their education and overall development is in my opinion the best way to make a long term impact on the society. I got in touch with Mrs. Nomita Kundandas Abreu,  and she enabled me, Ron Victor and few other volunteers to build the Network of Volunteers across USA. In addition, I started the action center in Atlanta after moving there in 1995. I continued to lead the National Management Committee until 2002 and after that I was instrumental in streamlining the process for Projects Selection and monitoring. In 2006, I became a Vibha Board member and in 2008 we registered Vibha in India. We are quite excited about the potential of channeling the energy of individuals, in particular, the youth in India to the cause of underprivileged children.

What were some of the challenges you faced during the growth phase of the organization?

The biggest challenge was to make people believe that there are a number of individuals and organizations in India that are doing wonderful work with children. Even among people who are willing to give, there is a huge apprehension about whether the resources are being put to good use. As a result, we have put a very high emphasis on monitoring the projects we fund through regular visits and reviewing their progress. While some of the concerns are still valid, the non-profit sector in India itself has gained a lot of credibility in the past two decades. As a result, people are more willing to donate now.

Share with us an experience that made you feel immensely satisfied about your contribution to Vibha.

When I visit the projects and see the happiness, excitement and hope in the faces of the children, it gives me immense satisfaction that all the effort of the volunteers is making a difference. In particular, one incident remained with me forever.  When I visited a project for street children in 1996 in my hometown Vijayawada, and saw the children playing the same game I played in my childhood with 7 stones and a ball, I knew that their childhood was being restored. I encourage all our supporters and volunteers to spare half a day of their next trip to India and visit a project. It will be a tremendous experience.

Where do you see Vibha ten years from now?

I see Vibha playing a huge role in making a tangible difference in the lives of children in India on a big scale. With the experience we are gaining and with increased confidence, we will be able to take up projects that have a wide impact. We will continue to scale up and replicate successful models across different geographic regions.  I see Vibha in the forefront of promoting the concept of ‘volunteering’ in India. We are one of the very few organizations that currently have such a potential.

You have been instrumental in forming the Vibha National volunteer network. How important was it to have a system like this for the volunteers?

The National Volunteers Network played a phenomenal role in the growth of the organization. Before we started the network, we used to get emails and phone calls from individuals in a number of cities and Universities. The willingness to help and make a difference, each in their individual way, was immense. The formation of the National Volunteer Network channeled this goodwill and energy of the individuals into a collective force. This is how a number of Action Centers were started and all those like-minded volunteers and supporters from within a city could make a bigger difference.  While the Action Centers flourished and were able to do bigger fund-raisers, the focus was always on the single volunteer. Each and every individual’s unique potential was nurtured and channelized towards the greater cause.

What are the innovations and novelties initiated by the Atlanta Action center that other Action centers can take a leaf from?

The volunteers and the leadership in the Atlanta Action Center have always believed in and implemented our core principles of “Encourage, Enable, and Empower” . New ideas are always encouraged. Whenever an individual volunteer/supporter or a group of them come forward with an idea, it is always given an enthusiastic response. When Sreekanth Pannala, then a PhD student in Georgia Tech came forward in 1998 with the grand idea of the “Dream Mile walk/Run” event, in spite of never having done anything in that scale, the whole team rallied behind the idea. It became a National event being organized annually in close to ten cities, raising more than a Million dollars in the process.  Similarly, Vibha Cricket tournaments, first started in Atlanta, have quickly become major fund-raisers in several cities.The most exciting thing we embarked on is starting the Vibha-Youth wing, with the goals of providing leadership potential to the youth, providing local hands-on volunteering opportunities and making them aware of the cause of children. We are extremely happy with the excitement in our youth and their willingness to make a difference.

How do you balance your work at Vibha with your demanding software profession?

Prioritization. I have made it a part of my daily schedule along with my personal and professional responsibilities. There will always be times when one takes precedence over the other. But, I consciously re-balance the priorities in such a way that I can continue to contribute over a long period.

Name three qualities a Vibha volunteer should possess in order to make a difference.

Integrity, Perseverance, Boldness.  Whatever we do, we are doing in the name of the child. So, integrity in the tasks we do, the decisions we take within Vibha is of utmost importance. Strict adherence to the core values of Vibha define what we are as volunteers and as an organization. Our task is not easy, whether in the field of fund-raising or in judicial allocation of the funds. Aiming for high targets and standards and persevering in what we believe in will help us in achieving our vision. Each volunteer needs to think “What more can I do”? Being bold, thinking out-of-the-box, and bringing exciting, and motivating ideas to the table has always been the hallmark of our volunteers.

Tell us about Vijay Vemulapalli, the person.

I had a blessed childhood, being the youngest of the four brothers in a semi-rural environment in Andhra Pradesh. I studied in various parts of India, BTech in REC Durgapur(West Bengal), MTech in IIT Kanpur (UP) and PhD in IIT Mumbai. I was in the teaching profession for two years. I came to USA in 1992 and did my MS from the University of Alabama, Tuscaloosa and have been a Software professional since 1995 in Atlanta. My wife Madhuri was a true life partner and her support to everything I did in my life was invaluable. Thanks to her, I have developed an interest in world travel and enjoying nature. Together, we traveled to several countries in South America, Central America and Europe. We have also done some long treks in Peru and in the Himalayas (Annapurna Circuit) in Nepal. My daughter Divya is nine years old and brightens my day, every day.

Who is your role model?

Mahatma Gandhi. His steadfast belief in his core principles and the way he communicated them and got an entire nation rallying for a cause is an inspirational example.

What is your message to all the volunteers at Vibha?

I would like to highlight two points drawing from my own personal experience. One – Prioritize your personal and professional responsibilities with your volunteering efforts. Make sure that there is a balance in your daily life. Make “giving” and “volunteering” integral parts of your lifestyle.  Two – Experience the difference being made in the lives of the children as a result of your efforts. In your next visit to India, make sure to visit a project and spend some time with the children.