The clear blue skies that hark the beginning of a Texas summer were a perfect accomplice to the delirious joys of cricket at the Dallas VIBHA Cricket tournament last month. Every year in June, VIBHA Dallas proudly sponsors the VIBHA cricket cup, which is our flagship event. Indeed, in its fourth year running, it’s no exaggeration to claim that this event is now an entrenched tradition among Dallas’ cricket loving masses. As looked forward to, prepared for and enjoyed, as a Spaniard might, his run with the bulls. 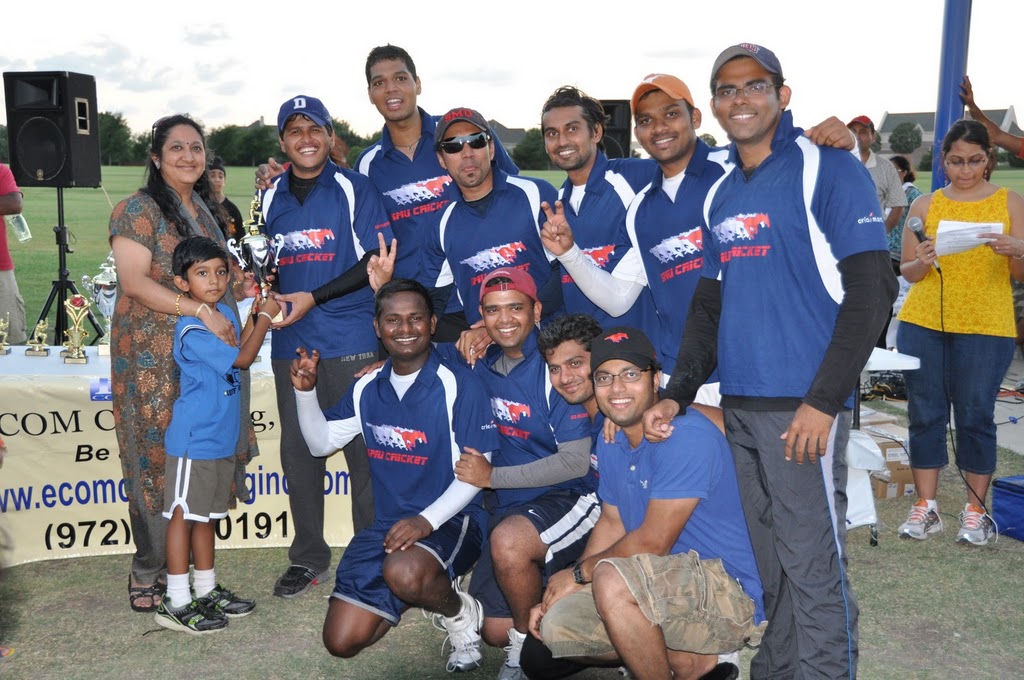 The rolling green fields of Russell Creek Park with its neatly laid pitches formed the backdrop for the cricketing Drama that extended over two weekends: June 5th and June 12th 2010. Approximately 360 players showed up with team shirts on their backs and adrenalin gushing through their veins. 24 men’s, 2 women’s and 6 youth teams vied for trophies in their respective categories. The men’s teams were culled from a plethora of already existing cricket leagues as well as local university teams. The women’s and youth teams were formed mostly through concerted promotion and organizational effort by the VIBHA volunteers.

The game itself was played as eight overs, with eight to a team (2 on reserve) and a hard tennis ball to minimize injury and presumably, liability! The playoffs were held the first weekend for the men’s games and the top teams percolated over to the adjacent weekend, when the finals were played. This year’s matches evoked the same vehement enthusiasm, friendly and” Not quite so friendly” competitiveness and an overall vibrant vibe, as the preceding years. There was plenty of classic cricket played – from boundaries to bowl outs, maiden overs to the ball sailing over the Maidaan… The Machiavellian strategies required to be the first among equals in the final games were in full display and relished by all the spectators. The cricketing moments – guffaw inducing as well as the gaffes, were plentiful and savored by all. Three teams went home clutching the cup while the others had to be content with vengeful aspirations for the next year to come. But no matter the outcome, it appeared that the love for the game and an appreciation of its finer points took healthier roots in the hearts of many of the players. This appeared to be especially true of the youth members- some of whom were barely 6 years of age. “ I play VIBHA cricket Tournament every year because it’s fun and gives me an opportunity for developing excellent team building skills. Plus it’s to support a great Charity. It makes me feel so good to raise funds for all the unfortunate kids in India”, says Rishi Gonuguntla, age 12, captain- Team Easterly Beasts, who were the runners up in the tournament.

Let’s assume for a minute that you were actually present on June 12th at Russell Creek park. As you walked into the grounds, you would have heard the heated enthusiasm of the supporters howling themselves hoarse, gathered in a circle around the pitch’s boundary as the youth teams jostled for the trophy. The men’s matches had a much calmer vibe with supporters being generally a bit more placid, with a deeper appreciation for the finer points of the game itself. The women’s match exuded camaraderie and some clever shots and bowling. You would have witnessed the families and onlookers sitting on the shaded pavilion benches, with battery operated fans, kids flying kites, and groups of people setting out picnic spreads. At around noon, your nostrils would have detected whiffs of Indian street food and you would have realized that Gopal Indian restaurant had set up a stall selling piping hot samosas, pakodas and ice cold Lassi. Your ear drums would have delighted in the blaring music that consisted of IPL team tracks along with the feet thumping Bollywood numbers. As the sun set, you would have witnessed the awards ceremony where the trophies were presented by our sponsors, to the winning and runner up teams. But most importantly, you would have left with a deeper understanding of the merits of supporting Vibha’s great cause due to some inspiring presentations by our volunteers.

The precision, fluidity and simplicity with which the event was executed belied the fact that hundreds of hours were poured into it by our stellar volunteers. Pre event planning started two to three months ahead of time and ran the gamut of tasks from finding event sponsors to getting a caterer to sell food. The selection of the venue, recruitment of teams, marketing of the event, tie up with cultural outreach programs through the city of Dallas and other sister organizations such as think India foundation, were all tasks that were managed seemingly effortlessly by an efficient team. On the day of the tournament too, our volunteers handled readying the pitch, registration, umpiring and the presentation ceremony, with aplomb. But perhaps, most notably, we started and ended (drum roll please)— on time. No small achievement, this!

Of course, the tournament would have not been possible without the generosity of our sponsors – chief among them being Ahluwalia Law Offices PC & ECOM Consulting Inc. FunAsia was our exclusive media partner. Indeed, the VIBHA cricket cup was quite a gala event and one that several in the community look forward to with much anticipation and excitement again next year.