When a Cyclone Strikes … (Update: Reports from the Ground)

Vibha volunteers are in constant touch with representatives on the ground aiding Cyclone Aila relief efforts. Here’s a brief update.

For the villagers of Sunderbans devastated by Cyclone Aila, the long road to recovery has just started. The flood water has receded and most villagers have gone back to their homes, or what remains of their homes. The flood has destroyed many of their huts and carried away most of their precious belongings. Many people do not even have clothes to wear, apart from what they were wearing when they fled to escape the gushing flood waters. The saline water has infiltrated ponds and cultivation fields, and thus robbing many people of their main source of livelihood. There is still an acute shortage of drinking water and food in many areas.

(Since our first appeal over the weekend, we have crossed just over $2,000 towards our initial minimum commitment of $10,000 for the relief effort. We have a long way to go and hopeful we can get there with your generous support)

Initially when relief camps were set up, a combined committee (named as the Sarvodalya committee) consisting of different branches of the government and local NGO’s oversaw relief operations in these camps. With villagers gradually returning back, the relief work has been delegated to the local Panchayat committees and NGO’s. Vibha has sanctioned $10,000 for short term relief to Baikunthapur Tarun Sangha (BTS), of which $6400 has already been disbursed. The funds will be used to provide short term relief to areas served by BTS. Short term relief will include distribution of items such as plastic sheets for temporary shelter, blankets, rice, wheat, clothing materials and cooking utensils. 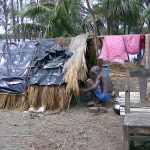 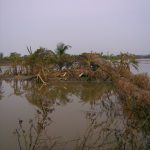 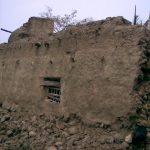 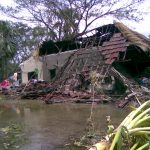 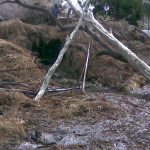 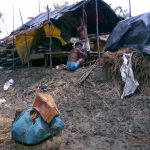 Ironically, this disaster is not getting the amount of media coverage as it should. Sunderbans is well known to be a flood prone region, however Cyclone Aila was not the regular type. This NASA satellite picture shows how immense the cyclone was. The Government of India is currently estimating the damages. A team was dispatched from the Central Government to inspect the area. Based on their report, a decision will be taken whether to declare Cyclone Aila to be a national calamity!

While government actions are progressing, it could be be slow to come and the residents need immedite help. It is time for us to come forward and do our utmost to help the cyclone ravaged community. Please donate generously to provide much needed emergency relief to Cyclone Aila victims.